Guanidinoacetic Acid and Creatine are Associated with Cardiometabolic Risk Factors in Healthy Men and Women: A Cross-Sectional Study

Guanidinoacetic acid (GAA) and creatine are natural amino acid derivatives that are heavily involved in cellular energy metabolism [1,2,3]. Much attention has been given recently to the potential role of these energy-related compounds in cardiometabolic diseases. For example, the high creatine kinase (CK) phenotype has been found in hypertension- and obesity-prone patients [4,5,6], and high CK activity has been reported to lead to dysfunctional vascular contractility and insulin resistance [6]. In addition, the biosynthesis of creatine from GAA is considered critical for methyl group consumption in humans [7], with altered methylation and consequent homocysteine production suggested as additional factors for cardiovascular disease risk [8,9]. Although the main focus has been on homocysteine metabolism, there have also been links between the GAA–creatine axis and classical cardiometabolic biomarkers, including insulin sensitivity and blood cholesterol [10]. In this study, we evaluated the associations of serum GAA and creatine with cardiometabolic risk factors—including body mass index (BMI), lipid profiles, high-sensitive C-reactive protein (CRP), glucose, and insulin—in apparently healthy men and women. A prespecified hypothesis suggested a negative correlation between an unfavorable cardiometabolic risk profile (including higher fasting insulin, higher total homocysteine, and higher body fat percentage) and serum levels of GAA and creatine.

This study involved a secondary analysis of a subset of the Diet and Physical Activity for Health Initiative (DiPAH) cohort (ClinicalTrials.gov ID: NCT01958333) that underwent cardiometabolic risk assessment and had archived serum. The DiPAH was started in 2008 as a long-term, nationally recognized health study that is focused on strategies for the prevention of chronic diseases in the Serbian population. The present study was a cross-sectional study designed to identify relationships between energy-related biomarkers of micronutritional status and cardiometabolic disease risk factors in healthy adults. Participants were selected to join the study on the basis of the following criteria: (a) previous participation in DiPAH trials; (b) age between 18 and 65 years; (c) no medical conditions that would limit the successful completion of the protocol; and (d) current residence in Serbia. Pregnant women, individuals taking dietary supplements, and individuals engaged in a programmed exercise regimen were excluded from the study. Of 11069 DiPAH subjects initially considered, 151 participants (82 women and 69 men) were eligible and consented to participate in the current study. The minimal sample size (n = 120) was calculated according to power analysis for correlation point biserial model, with the effects size set at 0.25, a two-tail alpha level of 0.05, and a study power of 0.80 (G-Power 3, Heinrich Heine University Düsseldorf, Düsseldorf, Germany). The study was conducted according to the guidelines laid down in the Declaration of Helsinki, and all procedures were approved by the local IRB at the University of Novi Sad.

Blood samples after an overnight fast of 10 h and anthropometric measures were obtained by trained research staff. A fasting sample of venous blood was immediately centrifuged, with serum stored in a freezer at −80 °C, and the sample was analyzed for specific biomarkers after study completion. Serum GAA and creatine were measured by liquid chromatography-tandem mass spectrometry (SCIEX LC-MS/MS 5500QTRAP, AB Sciex Ltd., Concord, ON, Canada). Lipid profiles and glucose were analyzed by standard enzymatic methods with an automatic analyzer (Hitachi 704, Tokyo, Japan), while C-reactive protein was measured with a high sensitivity immunoturbidimetric assay (Hitachi 912, Tokyo, Japan). Insulin was evaluated with the CLIA method by automated chemiluminescence. Total serum homocysteine was determined with a chemiluminescent immuno-assay method using a chemistry analyzer (DPC Immulite 2000, Siemens, Berlin, Germany). Height was measured by a stadiometer (Seca 213, Hamburg, Germany), while weight and body fat percentage were measured by a bioelectrical impedance analyzer (Omron BF 511, Kyoto, Japan). Body mass index (BMI) was calculated as weight in kilograms divided by the square of height in meters, and participants were categorized as non-overweight (BMI < 25.0 kg/m2) or overweight (BMI ≥ 25.0 kg/m2). All participants were assessed in underwear after voiding, and the same trained technician did the anthropometric assessment in aim to minimize the testing error.

Data are presented as the means ± standard deviation (SD) or frequencies (%). A multiple linear regression model with a stepwise method (adjusted for age and sex) was used to examine the relationships between serum GAA and serum creatine levels, and cardiometabolic risk factors. Multivariate-adjusted odds ratios for overweight participants were calculated across quartile categories of GAA and creatine, with a 95% confidence interval (CI) presented and a linear trend assessed across quartiles. Serum GAA and creatine were compared across sex and BMI categories using a two-tailed independent t-test. The significance level was set at p ≤ 0.05. The data were analyzed using the statistical package SPSS, version 21.0 (SPSS Inc., Chicago, IL, USA).

In conclusion, our results that GAA and creatine are associated with specific cardiometabolic risk factors (e.g., fasting insulin, total homocysteine, and body fat percentage) suggest a possible role of these energy-related compounds in the pathogenesis of cardiovascular and metabolic disease. The results from our study may help to better understand the metabolic aspects of these disorders, and suggest further evaluation of serum GAA and creatine applicability in the identification of adults with cardiometabolic disease risks.

This work was supported by the Serbian Ministry of Education, Science and Technological Development (Grant No. 175037), the Provincial Secretariat for Higher Education and Scientific Research (Grant No. 114-451-710), and the Faculty of Sport and PE 2017 Annual Award. The funds were received to cover the costs to publish in an open access journal.

The authors declare no conflict of interest. The funding sponsors had no role in the design of the study; in the collection, analyses, or interpretation of data; in the writing of the manuscript, or in the decision to publish the results. 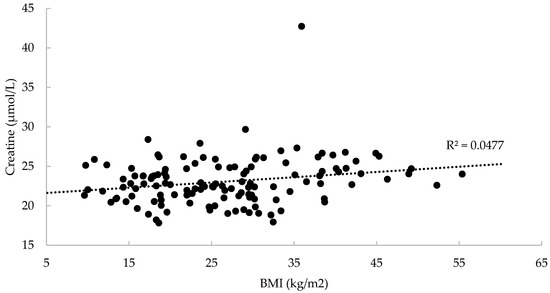