The Defense Meteorological Satellite Program (DMSP)/Operational Linescan System (OLS) stable nighttime light (NTL) data provide a wide range of potentials for studying global and regional dynamics, such as urban sprawl and electricity consumption. However, due to the lack of on-board calibration, it requires inter-annual calibration for these practical applications. In this study, we proposed a stepwise calibration approach to generate a temporally consistent NTL time series from 1992 to 2013. First, the temporal inconsistencies in the original NTL time series were identified. Then, a stepwise calibration scheme was developed to systematically improve the over- and under- estimation of NTL images derived from particular satellites and years, by making full use of the temporally neighbored image as a reference for calibration. After the stepwise calibration, the raw NTL series were improved with a temporally more consistent trend. Meanwhile, the magnitude of the global sum of NTL is maximally maintained in our results, as compared to the raw data, which outperforms previous conventional calibration approaches. The normalized difference index indicates that our approach can achieve a good agreement between two satellites in the same year. In addition, the analysis between the calibrated NTL time series and other socioeconomic indicators (e.g., gross domestic product and electricity consumption) confirms the good performance of the proposed stepwise calibration. The calibrated NTL time series can serve as useful inputs for NTL related dynamic studies, such as global urban extent change and energy consumption. View Full-Text
Keywords: nighttime light; time series; DMSP/OLS; DN values; stepwise; inconsistency nighttime light; time series; DMSP/OLS; DN values; stepwise; inconsistency
►▼ Show Figures 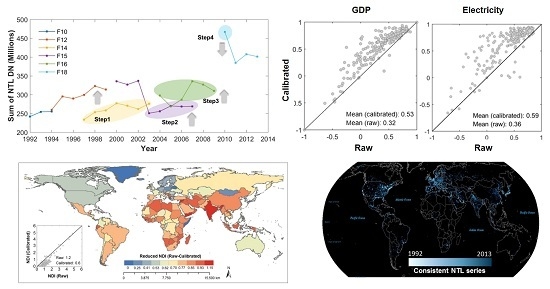