Decreased leaf moisture content, typically measured as equivalent water thickness (EWT), is an early signal of tree stress caused by drought, disease, or pest insects. We investigated the use of two terrestrial laser scanners (TLSs) employing different wavelengths for improving the understanding how EWT can be retrieved in a laboratory setting. Two wavelengths were examined for normalizing the effects of varying leaf structure and geometry on the measured intensity. The relationship between laser intensity features, using red (690 nm) and shortwave infrared (1550 nm) wavelengths, and the EWT of individual leaves or groups of needles were determined with and without intensity corrections. To account for wrinkles and curvatures of the leaves and needles, a model describing the relationship between incidence angle and backscattered intensity was applied. Additionally, a reflectance model describing both diffuse and specular reflectance was employed to remove the fraction of specular reflectance from backscattered intensity. A strong correlation (, RMSE = 0.004 g/cm2) was found between a normalized ratio of the two wavelengths and the measured EWT of samples. The applied intensity correction methods did not significantly improve the results of the study. The backscattered intensity responded to changes in EWT but more investigations are needed to test the suitability of TLSs to retrieve EWT in a forest environment. View Full-Text
Keywords: forest health; forestry; terrestrial laser scanning; lidar; multispectral lidar; leaf water content; monitoring; time series forest health; forestry; terrestrial laser scanning; lidar; multispectral lidar; leaf water content; monitoring; time series
►▼ Show Figures 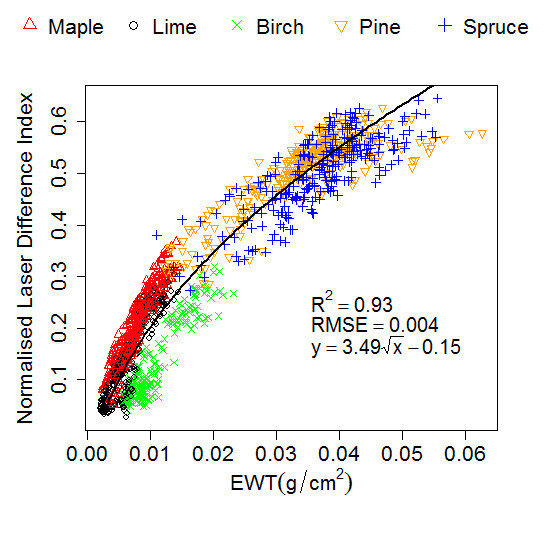