Land cover data derived from satellites are commonly used to prescribe inputs to models of the land surface. Since such data inevitably contains errors, quantifying how uncertainties in the data affect a model’s output is important. To do so, a spatial distribution of possible land cover values is required to propagate through the model’s simulation. However, at large scales, such as those required for climate models, such spatial modelling can be difficult. Also, computer models often require land cover proportions at sites larger than the original map scale as inputs, and it is the uncertainty in these proportions that this article discusses. This paper describes a Monte Carlo sampling scheme that generates realisations of land cover proportions from the posterior distribution as implied by a Bayesian analysis that combines spatial information in the land cover map and its associated confusion matrix. The technique is computationally simple and has been applied previously to the Land Cover Map 2000 for the region of England and Wales. This article demonstrates the ability of the technique to scale up to large (global) satellite derived land cover maps and reports its application to the GlobCover 2009 data product. The results show that, in general, the GlobCover data possesses only small biases, with the largest belonging to non–vegetated surfaces. In vegetated surfaces, the most prominent area of uncertainty is Southern Africa, which represents a complex heterogeneous landscape. It is also clear from this study that greater resources need to be devoted to the construction of comprehensive confusion matrices. View Full-Text
Keywords: land cover; Bayesian analysis; uncertainty; GlobCover 2009 land cover; Bayesian analysis; uncertainty; GlobCover 2009
►▼ Show Figures 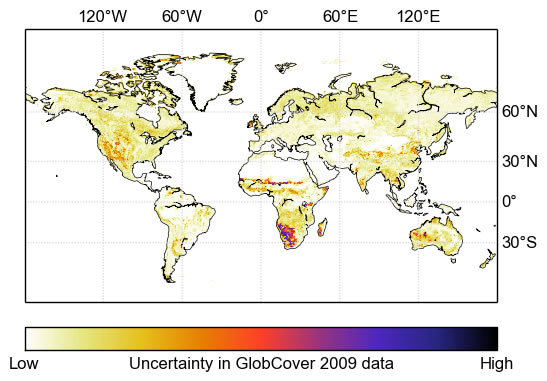