A novel approach to evaluating night-time road and street environment lighting conditions through 3D point clouds is presented. The combination of luminance imaging and 3D point cloud acquired with a terrestrial laser scanner was used for analyzing 3D luminance on the road surface. A calculation of the luminance (cd/m2) was based on the RGB output values of a Nikon D800E digital still camera. The camera was calibrated with a reference luminance source. The relative orientation between the luminance images and intensity image of the 3D point cloud was solved in order to integrate the data sets into the same coordinate system. As a result, the 3D model of road environment luminance is illustrated and the ability to exploit the method for evaluating the luminance distribution on the road surface is presented. Furthermore, the limitations and future prospects of the methodology are addressed. The method provides promising results for studying road lighting conditions in future lighting optimizations. The paper presents the methodology and its experimental application on a road section which consists of five luminaires installed on one side of a two-lane road in Otaniemi, Espoo, Finland. View Full-Text
Keywords: road environment; lighting; 3D; point clouds; luminance; terrestrial laser scanning road environment; lighting; 3D; point clouds; luminance; terrestrial laser scanning
►▼ Show Figures 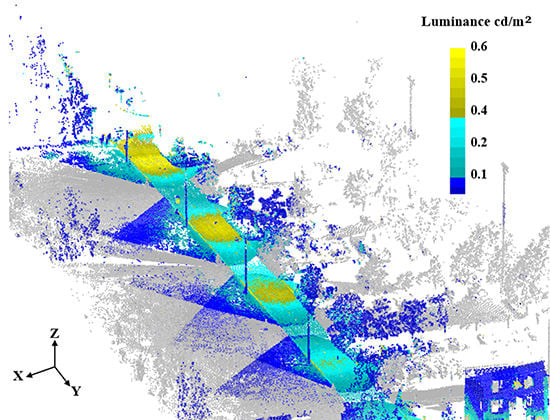