Arctic wetlands play a critical role in the global carbon cycle and are experiencing disproportionate impacts from climate change. Even though Alaska hosts 65% of U.S. wetlands, less than half of the wetlands in Alaska have been mapped by the U.S. Fish and Wildlife Service National Wetlands Inventory (NWI) or other high-resolution wetlands protocols. The availability of time series satellite data and the development of machine learning algorithms have enabled the characterization of Arctic wetland inundation dynamics and vegetation types with limited ground data input. In this study, we built a semi-automatic process to generate sub-pixel water fraction (SWF) maps across the Coastal Plain of the Arctic National Wildlife Refuge (ANWR) in Alaska using random forest regression and 139 Sentinel-2 images taken in ice-free seasons from 2016 to 2019. With this, we characterized the seasonal dynamics of wetland inundation and explored their potential usage in determining NWI water regimes. The highest levels of surface water expression were detected in June, resulting from seasonal active layer thaw and snowmelt. Inundation was most variable in riverbeds, lake and pond margins, and depressional wetlands, where water levels fluctuate substantially between dry and wet seasons. NWI water regimes that indicate frequent inundation, such as permanently flooded wetlands, had high SWF values (SWF ≥ 90%), while those with infrequent inundation, such as temporarily flooded wetlands, had low SWF values (SWF < 10%). Vegetation types were also classified through the synergistic use of a vegetation index, water regimes, synthetic-aperture radar (SAR) data, topographic data, and a random forest classifier. The random forest classification algorithms demonstrated good performance in classifying Arctic wetland vegetation types, with an overall accuracy of 0.87. Compared with NWI data produced in the 1980s, scrub-shrub wetlands appear to have increased from 91 to 258 km2 over the last three decades, which is the largest percentage change (182%) among all vegetation types. However, additional field data are needed to confirm this shift in vegetation type. This study demonstrates the potential of using time series satellite data and machine learning algorithms in characterizing inundation dynamics and vegetation types of Arctic wetlands. This approach could aid in the creation and maintenance of wetland inventories, including the NWI, in Arctic regions and enable an improved understanding of long-term wetland dynamics. View Full-Text
Keywords: wetland; inundation; vegetation; sentinel; arctic; ANWR; NWI wetland; inundation; vegetation; sentinel; arctic; ANWR; NWI
►▼ Show Figures 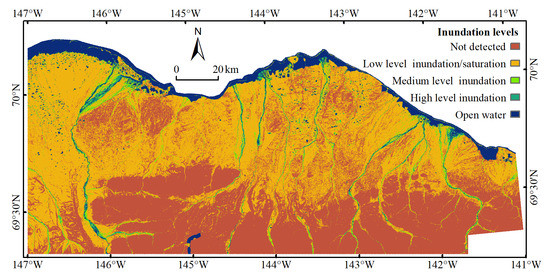