The normalized difference vegetation index (NDVI) is a simple but powerful indicator, that can be used to observe green live vegetation efficiently. Since its introduction in the 1970s, NDVI has been used widely for land management, food security, and physical models. For these applications, acquiring NDVI in both high spatial resolution and high temporal resolution is preferable. However, there is generally a trade-off between temporal and spatial resolution when using satellite images. To relieve this problem, a convolutional neural network (CNN) based downscaling model was proposed in this research. This model is capable of estimating 10-m high resolution NDVI from MODIS (Moderate Resolution Imaging Spectroradiometer) 250-m resolution NDVI by using Sentinel-1 10-m resolution synthetic aperture radar (SAR) data. First, this downscaling model was trained to estimate Sentinel-2 10-m resolution NDVI from a combination of upscaled 250-m resolution Sentinel-2 NDVI and 10-m resolution Sentinel-1 SAR data, by using data acquired in 2019 in the target area. Then, the generality of this model was validated by applying it to test data acquired in 2020, with the result that the model predicted the NDVI with reasonable accuracy (MAE = 0.090, ρ = 0.734 on average). Next, 250-m NDVI from MODIS data was used as input to confirm this model under conditions replicating an actual application case. Although there were mismatch in the original MODIS and Sentinel-2 NDVI data, the model predicted NDVI with acceptable accuracy (MAE = 0.108, ρ = 0.650 on average). Finally, this model was applied to predict high spatial resolution NDVI using MODIS and Sentinel-1 data acquired in target area from 1 January 2020~31 December 2020. In this experiment, double cropping of cabbage, which was not observable at the original MODIS resolution, was observed by enhanced temporal resolution of high spatial resolution NDVI images (approximately ×2.5). The proposed method enables the production of 10-m resolution NDVI data with acceptable accuracy when cloudless MODIS NDVI and Sentinel-1 SAR data is available, and can enhance the temporal resolution of high resolution 10-m NDVI data. View Full-Text
Keywords: synthetic aperture radar (SAR); multi-sensor fusion; deep learning; downscaling; normalized difference vegetation index (NDVI) synthetic aperture radar (SAR); multi-sensor fusion; deep learning; downscaling; normalized difference vegetation index (NDVI)
►▼ Show Figures 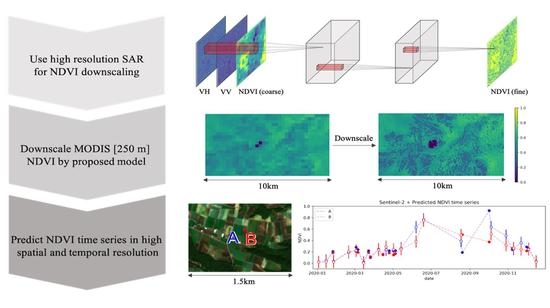