The present study aims to investigate the potential of multi-configuration Sentinel-1 (S-1) synthetic aperture radar (SAR) images for characterizing four wheat parameters: total fresh mass (TFM), total dry mass (TDM), plant heights (He), and water content (WC). Because they are almost independent on the weather conditions, we have chosen to use only SAR. Samples of wheat parameters were collected over seven fields (three irrigated and four rainfed fields) in Southwestern France. We first analyzed the temporal behaviors of wheat parameters (He, TDM, TFM and WC) between February and June 2016. Then, the temporal profiles of the S-1 backscattering coefficients (VV, VH), the difference (VH − VV), the sum of the polarizations (VH + VV) and their cumulative values are analyzed for two orbits (30 and 132) during the wheat-growing season (from January to July 2016). After that, S-1 signals were statistically compared with all crop parameters considering the impact of pass orbit, irrigation and two vegetative periods in order to identify the best S-1 configuration for estimating crop parameters. Interesting S-1 backscattering behaviors were observed with the various wheat parameters after separating irrigation impacts and vegetative periods. For the orbit 30 (mean incidence angle of 33.6°); results show that the best S-1 configurations (with coefficient of determination (R2) > 0.7) were obtained using the VV and VH + VV as a function of the He, TDM and WC, over irrigated fields and during the second vegetative period. For the orbit 132 (mean incidence angle of 43.4°), the highest dynamic sensitivities (R2 > 0.8) were observed for the VV and VH + VV configurations with He, TDM and TFM over irrigated fields during the first vegetative period. Overall, the sensitivity of S-1 data to wheat variables depended on the radar configuration (orbits and polarizations), the vegetative periods and was often better over irrigated fields in comparison with rainfed ones. Significant improvements of the determination coefficients were obtained when the cumulative (VH + VV) index was considered for He (R² > 0.9), TDM (R² > 0.9) and TFM (R² > 0.75) for irrigated fields, all along the crop cycle. The estimate of WC was more limited (R² > 0.6) and remained limited to the second period of the vegetation cycle (from flowering onwards). Whatever parameters were considered, the relative errors never exceeded 23%. This study has shown the importance of considering the agricultural practices (irrigation) and vegetative periods to effectively monitor some wheat parameters with S-1 data. View Full-Text
Keywords: Sentinel-1; biophysical parameters; cumulative indexes; orbits; irrigation; vegetative period Sentinel-1; biophysical parameters; cumulative indexes; orbits; irrigation; vegetative period
►▼ Show Figures 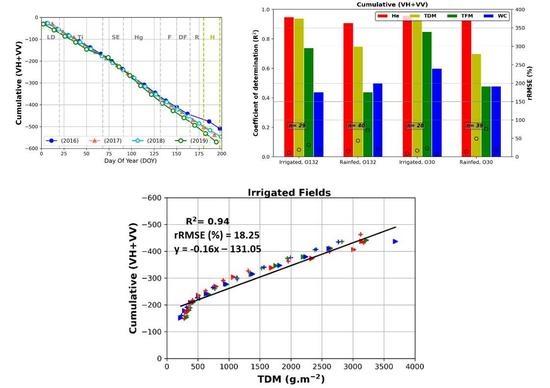