Effects of the COVID-19 Lockdown on Urban Light Emissions: Ground and Satellite Comparison

Plant phenology is closely related to light availability as diurnal and seasonal cycles are essential environmental cues for organizing bio-ecological processes. The natural cycles of light, however, have been dramatically disrupted by artificial light at night (ALAN) due to recent urbanization. The influence on plant phenology of ALAN and its spatial variation remain largely unknown. By analyzing satellite data on ALAN intensity across the United States, here, we showed that ALAN tended to advance the start date of the growing season (SOS), although the overall response of SOS to ALAN was relatively weak compared with other potential factors (e.g., preseason temperature). The phenological impact of ALAN showed a spatially divergent pattern, whereby ALAN mainly advanced SOS at climatically moderate regions within the United States (e.g., Virginia), while its effect was insignificant or even reversed at very cold (e.g., Minnesota) and hot regions (e.g., Florida). Such a divergent pattern was mainly attributable to its high sensitivity to chilling insufficiency, where the advancing effect on SOS was only triggered on the premise that chilling days exceeded a certain threshold. Other mechanisms may also play a part, such as the interplay among chilling, forcing and photoperiod and the difference in species life strategies. Besides, urban areas and natural ecosystems were found to suffer from similar magnitudes of influence from ALAN, albeit with a much higher baseline ALAN intensity in urban areas. Our findings shed new light on the phenological impact of ALAN and its relation to space and other environmental cues, which is beneficial to a better understanding and projection of phenology changes under a warming and urbanizing future. View Full-Text
Keywords: artificial light at night; light pollution; phenology; start of the growing season; chilling requirement; daylength artificial light at night; light pollution; phenology; start of the growing season; chilling requirement; daylength
►▼ Show Figures 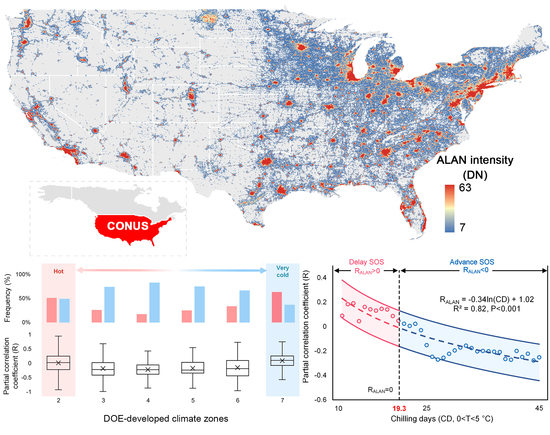