How to Build a 2D and 3D Aerial Multispectral Map?—All Steps Deeply Explained

The increased development of camera resolution, processing power, and aerial platforms helped to create more cost-efficient approaches to capture and generate point clouds to assist in scientific fields. The continuous development of methods to produce three-dimensional models based on two-dimensional images such as Structure from Motion (SfM) and Multi-View Stereopsis (MVS) allowed to improve the resolution of the produced models by a significant amount. By taking inspiration from the free and accessible workflow made available by OpenDroneMap, a detailed analysis of the processes is displayed in this paper. As of the writing of this paper, no literature was found that described in detail the necessary steps and processes that would allow the creation of digital models in two or three dimensions based on aerial images. With this, and based on the workflow of OpenDroneMap, a detailed study was performed. The digital model reconstruction process takes the initial aerial images obtained from the field survey and passes them through a series of stages. From each stage, a product is acquired and used for the following stage, for example, at the end of the initial stage a sparse reconstruction is produced, obtained by extracting features of the images and matching them, which is used in the following step, to increase its resolution. Additionally, from the analysis of the workflow, adaptations were made to the standard workflow in order to increase the compatibility of the developed system to different types of image sets. Particularly, adaptations focused on thermal imagery were made. Due to the low presence of strong features and therefore difficulty to match features across thermal images, a modification was implemented, so thermal models could be produced alongside the already implemented processes for multispectral and RGB image sets. View Full-Text
Keywords: structure from motion; multi-view stereo; Poisson Reconstruction; multispectral; aerial mapping; stitching; thermal; 2D and 3D mapping structure from motion; multi-view stereo; Poisson Reconstruction; multispectral; aerial mapping; stitching; thermal; 2D and 3D mapping
►▼ Show Figures 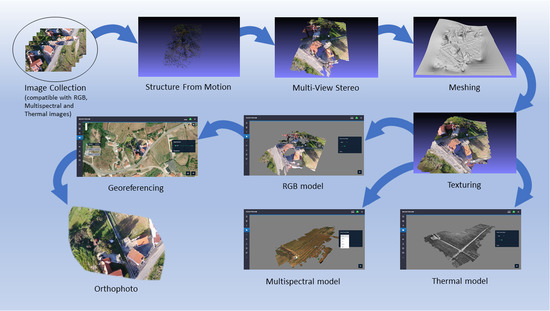