Habitat-Suitability Model for the Yellow Rail (Coturnicops noveboracensis) in the Northern Gulf Coast of Alabama and Mississippi, USA
Previous Article in Journal

An unprecedented rate of global climate change as a result of human impacts has affected both endotherms and ectotherms. This is of special concern for ectotherms, such as reptiles, as these species are suffering from large population declines and lack the dispersal ability of other taxa. There are many protected areas across the United States; however, these areas are fragmented, which hinders dispersal. We examined species distribution and dispersal capabilities for Terrapene carolina carolina, a relatively narrow range, low dispersal, and vulnerable species. We created climatic suitability models to predict changes in suitable habitat and identified important predictor variables. We modeled three time periods using MaxEnt and hypothesized that there would be an increase in northern habitat. We found that most of the suitable habitat changed at the northern end of the range and that mean temperature of driest quarter had the most influence on future predictions. Overall there were relatively moderate changes in suitable habitat, but where these changes occur affects accessibility. As an example, we examined these local scale movements within Oak Openings Region and found that individuals are capable of dispersing to new suitable habitats; however, other physical barriers will hinder movements. In conclusion, there is a critical need to protect this vulnerable reptilian species and our results suggest that T. c. carolina will expand their distribution northward. We suggest that land managers increase connectivity among protected areas to facilitate dispersal, but future studies should incorporate other dynamic ecological factors at finer spatial scale. View Full-Text
Keywords: climate change; conservation; MaxEnt modeling; reptiles climate change; conservation; MaxEnt modeling; reptiles
►▼ Show Figures 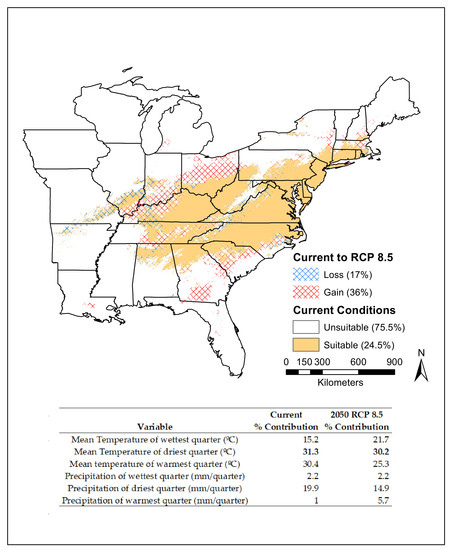