The impact of human activities on vegetation has been the focus of much research, but the impact on radiation energy through surface albedo associated with vegetation greenness and length of the growth season is still not well documented. Based on the land cover data for the years 2000 and 2015, this study first divided the land cover change in Beijing from 2000 to 2015 into five types according to the impact of human activities and vegetation resilience, namely, old urban areas (OU), urban expansion areas (UE), cropland (CP), mixed pixel areas (MP, which means the land covers other than urban expansion which had changed from 2000 to 2015), and the residual vegetation cover areas (pure pixels (PP), dominated by natural and seminatural vegetation, such as grassland, forest, and wetland). Then, we calculated the direct radiative forcing from the albedo change from 2000 to 2015 and analyzed the effect of vegetation on the albedo under different land cover types based on multi-resource Moderate Resolution Imaging Spectroradiometer (MODIS) products of vegetation, albedo, and solar radiation. The results showed that the most typical changes in land cover were from urban expansion. By comparing the PP with the four human-affected land cover types (OU, UE, MP, and CP), we confirmed that the radiative forcing increment between 2001–2003 and 2013–2015 in PP (0.01 W/m2) was much smaller than that in the four human-affected land cover types (the mean increment was 0.92 W/m2). This study highlights that human activities affected vegetation growth. This, in turn, brought changes in the albedo, thereby enhancing radiative forcing in Beijing during 2000–2015. View Full-Text
Keywords: urbanization; land cover; phenology; vegetation index; radiation energy budget urbanization; land cover; phenology; vegetation index; radiation energy budget
►▼ Show Figures 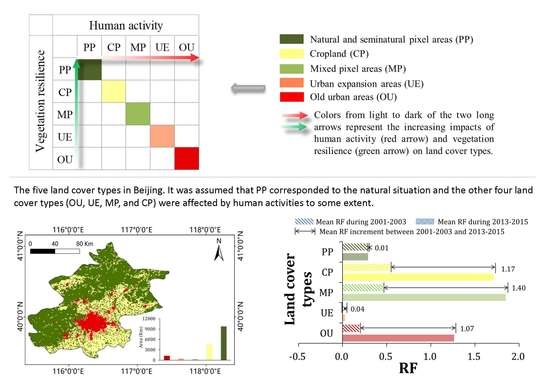