Permanent forest dynamics plots have provided valuable insights into many aspects of forest ecology. The evaluation of their representativeness within the landscape is necessary to understanding the limitations of findings from permanent plots at larger spatial scales. Studies on the representativeness of forest plots with respect to landscape heterogeneity and disturbance effect have already been carried out, but knowledge of how multiple disturbances affect plot representativeness is lacking—particularly in sites where several disturbances can occur between forest plot censuses. This study explores the effects of five typhoon disturbances on the Fushan Forest Dynamics Plot (FFDP) and its surrounding landscape, the Fushan Experimental Forest (FEF), in Taiwan where typhoons occur annually. The representativeness of the FFDP for the FEF was studied using four topographical variables derived from a digital elevation model and two vegetation indices (VIs), Normalized Difference Vegetation Index (NDVI) and Normalized Difference Infrared Index (NDII), calculated from Landsat-5 TM, Landsat-7 ETM+, and Landsat-8 OLI data. Representativeness of four alternative plot designs were tested by dividing the FFDP into subplots over wider elevational ranges. Results showed that the FFDP neither represents landscape elevational range (<10%) nor vegetation cover (<7% of the interquartile range, IQR). Although disturbance effects (i.e., ΔVIs) were also different between the FFDP and the FEF, comparisons showed no under- or over-exposure to typhoon damage frequency or intensity within the FFDP. In addition, the ΔVIs were of the same magnitudes in the plots and the reserve, and the plot covered 30% to 75.9% of IQRs of the reserve ΔVIs. Unexpectedly, the alternative plot designs did not lead to increased representation of damage for 3 out of the 4 tested typhoons and they did not suggest higher representativeness of rectangular vs. square plots. Based on the comparison of mean Euclidian distances, two rectangular plots had smaller distances than four square or four rectangular plots of the same area. Therefore, this study suggests that the current FFDP provides a better representation of its landscape disturbances than alternatives, which contained wider topographical variation and would be more difficult to conduct ground surveys. However, upscaling needs to be done with caution as, in the case of the FEF, plot representativeness varied among typhoons. View Full-Text
Keywords: forest disturbances; typhoon; forest permanent plots; representativeness; landscape ecology forest disturbances; typhoon; forest permanent plots; representativeness; landscape ecology
►▼ Show Figures 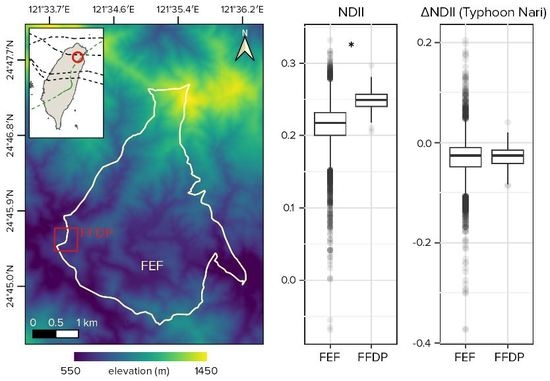