Short temporal baseline regular Synthetic Aperture Radar (SAR) interferometry is a tool well suited for wide area monitoring of agricultural activities, urgently needed in European Union Common Agricultural Policy (CAP) enforcement. In this study, we demonstrate and describe in detail, how mowing and ploughing events can be identified from Sentinel-1 6-day interferometric coherence time series. The study is based on a large dataset of 386 dual polarimetric Sentinel-1 VV/VH SAR and 351 Sentinel-2 optical images, and nearly 2000 documented mowing and ploughing events on more than 1000 parcels (average 10.6 ha, smallest 0.6 ha, largest 108.5 ha). Statistical analysis revealed that mowing and ploughing cause coherence to increase when compared to values before an event. In the case of mowing, the coherence increased from 0.18 to 0.35, while Sentinel-2 NDVI (indicating the amount of green chlorophyll containing biomass) at the same time decreased from 0.75 to 0.5. For mowing, there was virtually no difference between the polarisations. After ploughing, VV-coherence grew up to 0.65 and VH-coherence to 0.45, while NDVI was around 0.2 at the same time. Before ploughing, both coherence and NDVI values were very variable, determined by the agricultural management practices of the parcel. Results presented here can be used for planning further studies and developing mowing and ploughing detection algorithms based on Sentinel-1 data. Besides CAP enforcement, the results are also useful for food security and land use change detection applications. View Full-Text
Keywords: SAR; agriculture; interferometric coherence; Sentinel-1 SAR; agriculture; interferometric coherence; Sentinel-1
►▼ Show Figures 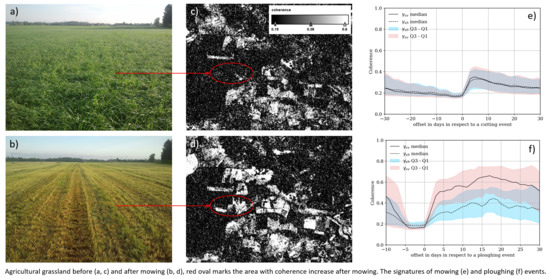