The uncertainty of flash flood makes them highly difficult to predict through conventional models. The physical hydrologic models of flash flood prediction of any large area is very difficult to compute as it requires lot of data and time. Therefore remote sensing data based models (from statistical to machine learning) have become highly popular due to open data access and lesser prediction times. There is a continuous effort to improve the prediction accuracy of these models through introducing new methods. This study is focused on flash flood modeling through novel hybrid machine learning models, which can improve the prediction accuracy. The hybrid machine learning ensemble approaches that combine the three meta-classifiers (Real AdaBoost, Random Subspace, and MultiBoosting) with J48 (a tree-based algorithm that can be used to evaluate the behavior of the attribute vector for any defined number of instances) were used in the Gorganroud River Basin of Iran to assess flood susceptibility (FS). A total of 426 flood positions as dependent variables and a total of 14 flood conditioning factors (FCFs) as independent variables were used to model the FS. Several threshold-dependent and independent statistical tests were applied to verify the performance and predictive capability of these machine learning models, such as the receiver operating characteristic (ROC) curve of the success rate curve (SRC) and prediction rate curve (PRC), efficiency (E), root-mean square-error (RMSE), and true skill statistics (TSS). The valuation of the FCFs was done using AdaBoost, frequency ratio (FR), and Boosted Regression Tree (BRT) models. In the flooding of the study area, altitude, land use/land cover (LU/LC), distance to stream, normalized differential vegetation index (NDVI), and rainfall played important roles. The Random Subspace J48 (RSJ48) ensemble method with an area under the curve (AUC) of 0.931 (SRC), 0.951 (PRC), E of 0.89, sensitivity of 0.87, and TSS of 0.78, has become the most effective ensemble in predicting the FS. The FR technique also showed good performance and reliability for all models. Map removal sensitivity analysis (MRSA) revealed that the FS maps have the highest sensitivity to elevation. Based on the findings of the validation methods, the FS maps prepared using the machine learning ensemble techniques have high robustness and can be used to advise flood management initiatives in flood-prone areas. View Full-Text
Keywords: ensemble machine learning; flood hazard susceptibility; Gorganroud River Basin; validation ensemble machine learning; flood hazard susceptibility; Gorganroud River Basin; validation
►▼ Show Figures 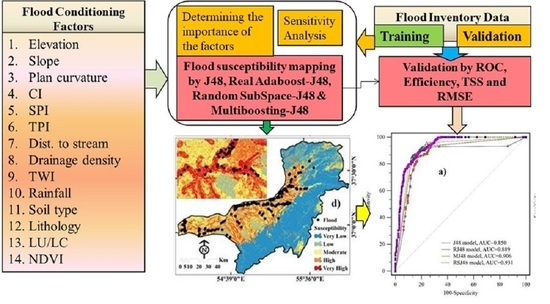