The knowledge of extreme total water levels (ETWLs) and the derived impact, coastal flooding and erosion, is crucial to face the present and future challenges exacerbated in European densely populated coastal areas. Based on 24 years (1993–2016) of multimission radar altimetry, this paper investigates the contribution of each water level component: tide, surge and annual cycle of monthly mean sea level (MMSL) to the ETWLs. It focuses on the contribution of the annual variation of MMSL in the coastal flooding extreme events registered in a European database. In microtidal areas (Black, Baltic and Mediterranean Sea), the MMSL contribution is mostly larger than tide, and it can be at the same order of magnitude of the surge. In meso and macrotidal areas, the MMSL contribution is <20% of the total water level, but larger (>30%) in the North Sea. No correlation was observed between the average annual cycle of monthly mean sea level (AMMSL) and coastal flooding extreme events (CFEEs) along the European coastal line. Positive correlations of the component variance of MMSL with the relative frequency of CFEEs extend to the Central Mediterranean (r = 0.59), North Sea (r = 0.60) and Baltic Sea (r = 0.75). In the case of positive MMSL anomalies, the correlation expands to the Bay of Biscay and northern North Atlantic (at >90% of statistical significance). The understanding of the spatial and temporal patterns of a combination of all the components of the ETWLs shall improve the preparedness and coastal adaptation measures to reduce the impact of coastal flooding. View Full-Text
Keywords: storm surge; coastal flooding; marine storms; natural hazards; steric-effect; satellite altimetry storm surge; coastal flooding; marine storms; natural hazards; steric-effect; satellite altimetry
►▼ Show Figures 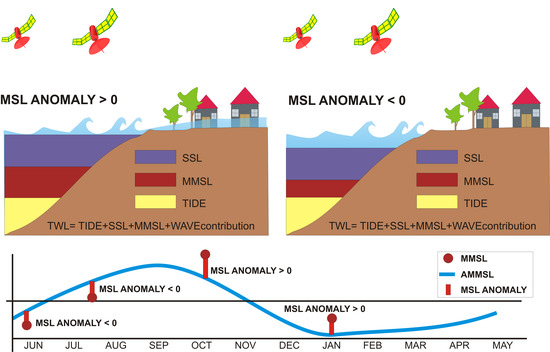