National-Scale Variation and Propagation Characteristics of Meteorological, Agricultural, and Hydrological Droughts in China

The regional and national scales variation and propagation characteristics of different types of droughts are critical for improving drought resilience, while information is limited in China. The objective of this research was to investigate the evolution and propagation characteristics of three types of droughts using standardized indices at multi-timescales in different sub-regions of China. The indices included Standardized Precipitation/Soil Moisture/Runoff Index (SPI/SSI/SRI) using the optimal probability density function, representing meteorological, agricultural, and hydrological droughts based on precipitation, soil water storage, and baseflow-groundwater runoff, respectively. Wavelet analysis was used to reveal their periodical characteristics. Modified Mann-Kendall trend test was used to compare the trend among drought indices. Correlation coefficients between SPI and SSI/SRI were calculated to identify the time-lags of SPI with SSI and SRI. In general, droughts indicated by SPI agreed well with the historical drought events at different sub-regions. The main periods of SSI were closer to SPI than SRI, indicating stronger connections of agricultural drought with meteorological drought. A weaker connection between meteorological and agricultural/hydrological droughts at shorter timescales was observed in northwestern arid and semi-arid regions. The propagation from meteorological to agricultural or hydrological droughts were well denoted by the lagged time (months) from SPI to SSI or SRI at a timescale ranged from 0 (mostly located in south China) to 5 months (mostly located in northeastern China) for 1-, 3-, 6-, 12-, or 24-month timescale; this was a new finding for China. The methods of wavelet combining trend test and Pearson coefficient showed meaningful power for revealing the drought propagation characteristics and the obtained results can be a good reference for other regions of the world since this study compared different climate zones from arid to humid conditions. The study provides crucial information and guidance to develop drought management strategies at regional to national scale and their critical time of action. View Full-Text
Keywords: drought type; standardized drought index; wavelet analysis; trend; lag drought type; standardized drought index; wavelet analysis; trend; lag
►▼ Show Figures 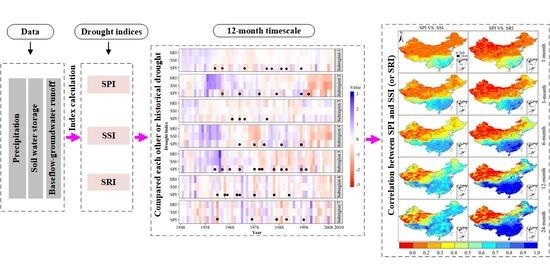