In-vivo foliar spectroscopy, also known as contact hyperspectral reflectance, enables rapid and non-destructive characterization of plant physiological status. This can be used to assess pathogen impact on plant condition both prior to and after visual symptoms appear. Challenging this capacity is the fact that dead tissue yields relatively consistent changes in leaf optical properties, negatively impacting our ability to distinguish causal pathogen identity. Here, we used in-situ spectroscopy to detect and differentiate Phytophthora infestans (late blight) and Alternaria solani (early blight) on potato foliage over the course of disease development and explored non-destructive characterization of contrasting disease physiology. Phytophthora infestans, a hemibiotrophic pathogen, undergoes an obligate latent period of two–seven days before disease symptoms appear. In contrast, A. solani, a necrotrophic pathogen, causes symptoms to appear almost immediately when environmental conditions are conducive. We found that respective patterns of spectral change can be related to these differences in underlying disease physiology and their contrasting pathogen lifestyles. Hyperspectral measurements could distinguish both P. infestans-infected and A. solani-infected plants with greater than 80% accuracy two–four days before visible symptoms appeared. Individual disease development stages for each pathogen could be differentiated from respective controls with 89–95% accuracy. Notably, we could distinguish latent P. infestans infection from both latent and symptomatic A. solani infection with greater than 75% accuracy. Spectral features important for late blight detection shifted over the course of infection, whereas spectral features important for early blight detection remained consistent, reflecting their different respective pathogen biologies. Shortwave infrared wavelengths were important for differentiation between healthy and diseased, and between pathogen infections, both pre- and post-symptomatically. This proof-of-concept work supports the use of spectroscopic systems as precision agriculture tools for rapid and early disease detection and differentiation tools, and highlights the importance of careful consideration of underlying pathogen biology and disease physiology for crop disease remote sensing. View Full-Text
Keywords: field spectroscopy; pathogen; plant disease; agriculture; shortwave infrared; hyperspectral field spectroscopy; pathogen; plant disease; agriculture; shortwave infrared; hyperspectral
►▼ Show Figures 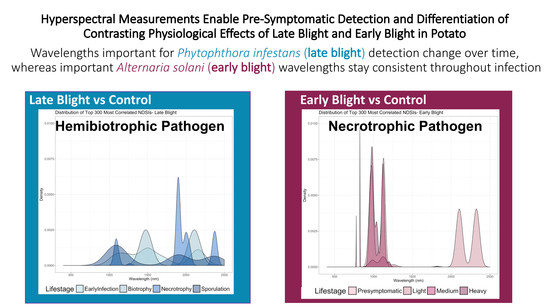