The loose combination (LC) and the tight combination (TC) are two different models in the combined processing of four global navigation satellite systems (GNSSs). The former is easy to implement but may be unusable with few satellites, while the latter should cope with the inter-system bias (ISB) and is applicable for few tracked satellites. Furthermore, in both models, the inter-frequency bias (IFB) in the GLObal NAvigation Satellite System (GLONASS) system should also be removed. In this study, we aimed to investigate the performance difference of ambiguity resolution and position estimation between these two models simultaneously using the single-frequency data of all four systems (GPS + GLONASS + Galileo + BeiDou Navigation Satellite System (BDS)) in three different environments, i.e., in an open area, with surrounding high buildings, and under a block of high buildings. For this purpose, we first provide the definition of ISB and IFB from the perspective of the hardware delays, and then propose practical algorithms to estimate the IFB rate and ISB. Thereafter, a comprehensive performance comparison was made between the TC and LC models. Experiments were conducted to simulate the above three observation environments: the typical situation and situations suffering from signal obstruction with high elevation angles and limited azimuths, respectively. The results show that in a typical situation, the TC and LC models achieve a similar performance. However, when the satellite signals are severely obstructed and few satellites are tracked, the float solution and ambiguity fixing rates in the LC model are dramatically decreased, while in the TC model, there are only minor declines and the difference in the ambiguity fixing rates can be as large as 30%. The correctly fixed ambiguity rates in the TC model also had an improvement of around 10%. Once the ambiguity was fixed, both models achieved a similar positioning accuracy. View Full-Text
Keywords: tight combination; inter-frequency bias; inter-system bias; multi-GNSS tight combination; inter-frequency bias; inter-system bias; multi-GNSS
►▼ Show Figures 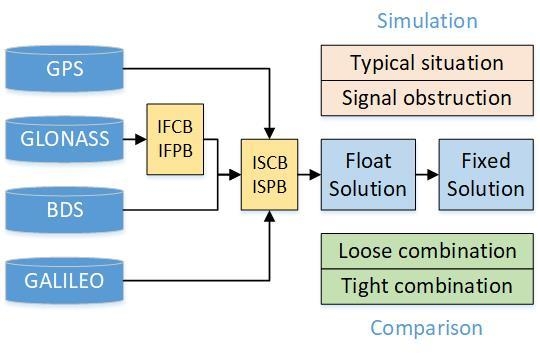