A Geographically Weighted Regression Approach to Understanding Urbanization Impacts on Urban Warming and Cooling: A Case Study of Las Vegas

A surface urban heat island (SUHI) effect is one of the most significant consequences of urbanization. Great progress has been made in evaluating the SUHI with cross-sectional studies performed in a number of cities across the globe. Few studies; however, have focused on the spatiotemporal changes in an area over a long period of time. Using multi-temporal remote sensing data sets, this study examined the spatiotemporal changes of the SUHI intensity in Las Vegas, Nevada, over a 15-year period from 2001 to 2016. We applied the geographically weighted regression (GWR) and advanced statistical approaches to investigating the SUHI variation in relation to several important biophysical indicators in the region. The results show that (1) Las Vegas had experienced a significant increase in the SUHI over the 15 years, (2) Vegetation and large and small water bodies in the city can help mitigate the SUHI effect and the cooling effect of vegetation had increased continuously from 2001 to 2016, (3) An urban heat sink (UHS) was identified in developed areas with low to moderate intensity, and (4) Increased surface temperatures were mainly driven by the urbanization-induced land conversions occurred over the 15 years. Findings from this study will inspire thoughts on practical guidelines for SUHI mitigation in a fast-growing desert city. View Full-Text
Keywords: surface urban heat island; geographically weighted regression; surface urban heat sink; urbanization; Las Vegas surface urban heat island; geographically weighted regression; surface urban heat sink; urbanization; Las Vegas
►▼ Show Figures 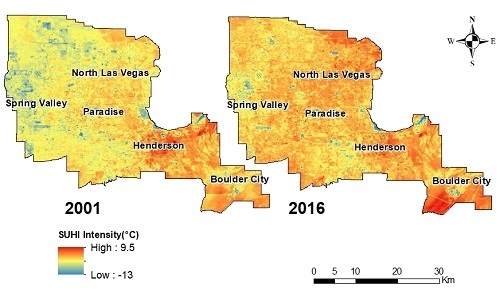