Rapid urbanization has resulted in a serious urban heat island effect in the Hangzhou Metropolitan Area of China during the past decades, negatively impacting the area’s sustainable development. Using Landsat images from 2000 to 2015, this paper analysed the spatial-temporal patterns in a surface urban heat island (SUHI) and investigated its relationship with urbanization. The derived land surface temperature (LST) and surface urban heat island intensity (SUHII) were used to quantify the SUHI effect. Spatial analysis was employed to illustrate the spatial distribution and evolution of a SUHI. The geographically weighted regression (GWR) model was implemented to identify statistically significant factors that influenced the change of SUHII. The results show that hot and very hot spot areas increased from 387 km2 in 2000 to 615 km2 in 2015, and the spatial distribution changed from a monocentric to a polycentric pattern. The results also indicate that high-LST clusters moved towards the east, which was consistent with urban expansion throughout the study period. These changes mirrored the intensive development of three satellite towns. The statistical analysis suggests that both population density (e.g., changes in population density, CPOPD) and green space (e.g., changes in green space fraction, CGSF) strongly affected the changes in SUHII at different stages of the urbanization process. Increasing in population density has a lastingly effect on elevating the SUHII, whereas increasing green space has a constantly significant effect in mitigating the SUHII. These findings suggest that urban planners and policymakers should protect the cultivated lands in suburbs and exurbs, and make efforts to improve the utilization efficiency of construction land by encouraging the migrating population to live within the existing built-up regions. View Full-Text
Keywords: surface urban heat island; spatial analysis; geographically weighted regression; Landsat; Hangzhou surface urban heat island; spatial analysis; geographically weighted regression; Landsat; Hangzhou
►▼ Show Figures 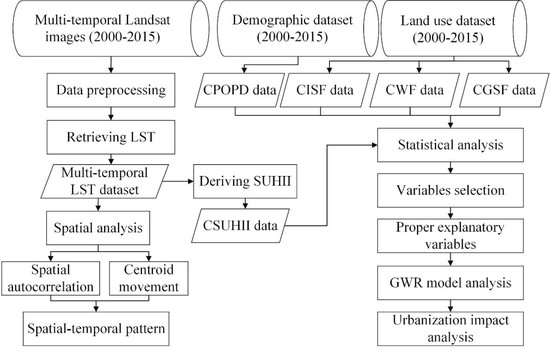