The European heatwave of 2018 led to record-breaking temperatures and extremely dry conditions in many parts of the continent, resulting in widespread decrease in agricultural yield, early tree-leaf senescence, and increase in forest fires in Northern Europe. Our study aims to capture the impact of the 2018 European heatwave on the terrestrial ecosystem through the lens of a high-resolution solar-induced fluorescence (SIF) data acquired from the Orbiting Carbon Observatory-2 (OCO-2) satellite. SIF is proposed to be a direct proxy for gross primary productivity (GPP) and thus can be used to draw inferences about changes in photosynthetic activity in vegetation due to extreme events. We explore spatial and temporal SIF variation and anomaly in the spring and summer months across different vegetation types (agriculture, broadleaved forest, coniferous forest, and mixed forest) during the European heatwave of 2018 and compare it to non-drought conditions (most of Southern Europe). About one-third of Europe’s land area experienced a consecutive spring and summer drought in 2018. Comparing 2018 to mean conditions (i.e., those in 2015–2017), we found a change in the intra-spring season SIF dynamics for all vegetation types, with lower SIF during the start of spring, followed by an increase in fluorescence from mid-April. Summer, however, showed a significant decrease in SIF. Our results show that particularly agricultural areas were severely affected by the hotter drought of 2018. Furthermore, the intense heat wave in Central Europe showed about a 31% decrease in SIF values during July and August as compared to the mean over the previous three years. Furthermore, our MODIS (Moderate Resolution Imaging Spectroradiometer) and OCO-2 comparative results indicate that especially for coniferous and mixed forests, OCO-2 SIF has a quicker response and a possible higher sensitivity to drought in comparison to MODIS’s fPAR (fraction of absorbed photosynthetically active radiation) and the Normalized Difference Vegetation Index (NDVI) when considering shorter reference periods, which highlights the added value of remotely sensed solar-induced fluorescence for studying the impact of drought on vegetation. View Full-Text
Keywords: chlorophyll fluorescence; remote sensing; ecosystems; spring–summer; forest chlorophyll fluorescence; remote sensing; ecosystems; spring–summer; forest
►▼ Show Figures 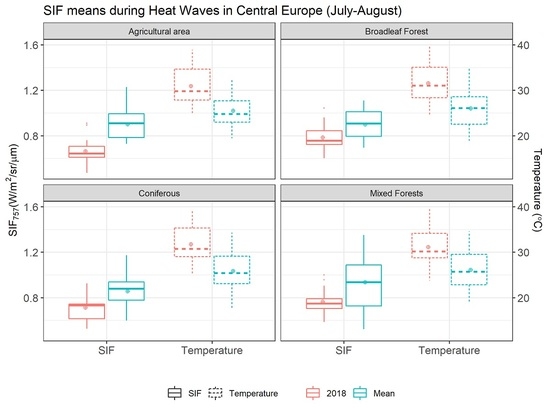