In Situ Aircraft Measurements of CO2 and CH4: Mapping Spatio-Temporal Variations over Western Korea in High-Resolutions
Previous Article in Journal

Understanding the spatiotemporal dynamics of bamboo forests is of critical importance as it characterizes the interaction between forest and agricultural ecosystems and provides essential information for sustainable ecosystem management and decision-making. Thus far, the specific dynamics of moso bamboo (Phyllostachys edulis) and other bamboo are still unknown. In this study, we used temporal information extracted from Landsat time series stacks with Google Earth Engine (GEE) to characterize the spatiotemporal dynamics of bamboo forests, including moso bamboo and other bamboo, in Lin’an County, China, from 2000 to 2019. The bamboo forests were mapped in four periods: the early 2000s (2000–2004), the late 2000s (2005–2009), the early 2010s (2010–2014), and the late 2010s (2015–2019). The overall accuracy of these maps ranged from 97% to 99%. We then analyzed the spatiotemporal dynamics of the bamboo forests at the county and subdistrict/township scales, and probed the bamboo forest gain and loss with respect to the terrain features. Our findings show that bamboo forests increased by 4% from 2000 to 2014, followed by a sharp decrease of 13% in the late 2010s. The decrease was mainly caused by the loss of other bamboo. Approximately 69% of the bamboo forest gain occurred in non-bamboo forest areas, and the rest occupied non-forest areas. Bamboo forest loss was mainly due to conversion into orchard (59%) and forest plantation (22%). Compared to bamboo forest gain, bamboo forest loss was typically observed in areas with lower elevations and steeper slopes. Our study offers spatially explicit and timely insight into bamboo forest changes at the regional scale. The derived maps can be applied to study the drivers, consequences, and future trends of bamboo forest dynamics, which will contribute to sustainable ecosystem management. View Full-Text
Keywords: subtropical bamboo forests; remote sensing; GEE; time series analysis subtropical bamboo forests; remote sensing; GEE; time series analysis
►▼ Show Figures 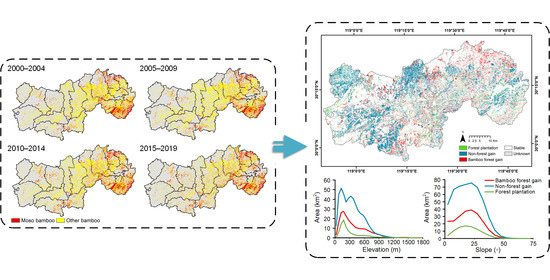