In the coastal environment the optical properties can vary on temporal scales that are shorter than the near-polar orbiting satellite temporal resolution (~1 image per day), which does not allow capturing most of the coastal optical variability. The objective of this work is to fill the gap between the near-polar orbiting and geostationary sensor temporal resolutions, as the latter sensors provide multiple images of the same basin during the same day. To do that, a Level 3 hyper-temporal analysis-ready Ocean Color (OC) dataset, named Virtual Geostationary Ocean Color Sensor (VGOCS), has been created. This dataset contains the observations acquired over the North Adriatic Sea by the currently functioning near-polar orbiting sensors, allowing approaching the geostationary sensor temporal resolution. The problem in using data from different sensors is that they are characterized by different uncertainty sources that can introduce artifacts between different satellite images. Hence, the sensors have different spatial and spectral resolutions, their calibration procedures can have different accuracies, and their Level 2 data can be retrieved using different processing chains. Such differences were reduced here by adjusting the satellite data with a multi-linear regression algorithm that exploits the Fiducial Reference Measurements data stream of the AERONET-OC water-leaving radiance acquired at the Acqua Alta Oceanographic Tower, located in the Gulf of Venice. This work aims to prove the suitability of VGOCS in analyzing the coastal optical variability, presenting the improvement brought by the adjustment on the quality of the satellite data, the VGOCS spatial and temporal coverage, and the inter-sensor differences. Hence, the adjustment will strongly increase the agreement between the satellite and in situ data and between data from different near-polar orbiting OC imagers; moreover, the adjustment will make available data traditionally masked in the standard processing chains, increasing the VGOCS spatial and temporal coverage, fundamental to analyze the coastal optical variability. Finally, the fulfillment by VGOCS of the three conditions for a hyper-temporal dataset will be demonstrated in this work. View Full-Text
Keywords: fiducial reference measurements; hyper-temporal dataset; optical radiometry; coastal environment; observation geometry fiducial reference measurements; hyper-temporal dataset; optical radiometry; coastal environment; observation geometry
►▼ Show Figures 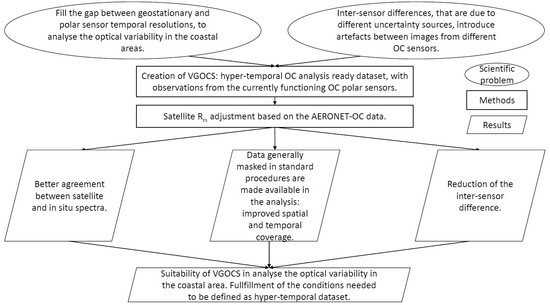