Time-series of imagery acquired by the Moderate Resolution Imaging Spectroradiometer (MODIS) has previously been used to estimate woody and herbaceous vegetation cover in savannas. However, this is challenging due to the mixture of woody and herbaceous plant functional types with specific contributions to the phenological signal and variations in soil background reflectance signatures observed from satellite. These factors cause variations in the accuracy and precision of woody cover estimates from different modelling approaches and datasets. Here, woody cover is estimated over Kruger National Park (KNP) from the MODIS 16-day composite time-series data using dry season NDVI/SAVI images and applying NDVIsoil determination methods. The woody cover estimates when NDVIsoil was ignored had R2 = 0.40, p < 0.01, slope = 1.01, RMSE (root mean square error) = 15.26% and R2 = 0.32, p < 0.03, slope = 0.79, RMSE = 16.39% for NDVIpixel and SAVIpixel, respectively, when compared to field plot data of plant functional type fractional cover. The woody cover estimated from the soil determination methods had a slope closer to 1 for both NDVI and SAVI but also a slightly higher RMSE. For a soil-invariant method, RMSE = 19.04% and RMSE = 17.34% were observed for NDVI and SAVI respectively, while for a soil-variant method, RMSE = 18.28% and RMSE = 19.17% were found for NDVI and SAVI. The woody cover estimated from all models had a high correlation and significant relationship with LiDAR/SAR based estimates and a woody cover map produced by Bucini. Woody cover maps are required for vegetation succession monitoring, grazing impact assessment, climate change mitigation and adaptation research and dynamic vegetation model validation. View Full-Text
Keywords: soil reflectance; woody cover; phenology; MODIS; NDVI; SAVI soil reflectance; woody cover; phenology; MODIS; NDVI; SAVI
►▼ Show Figures 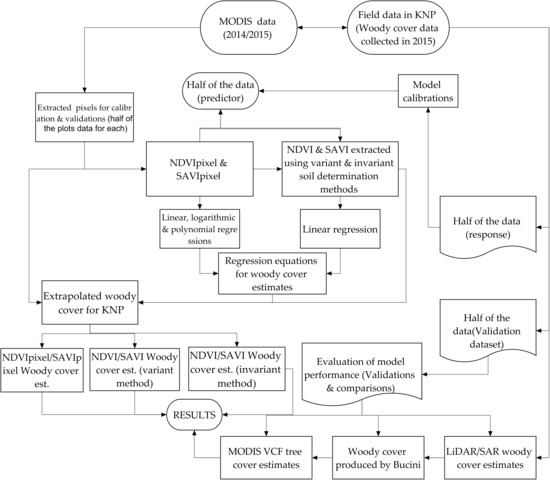