Climate change is a global challenge with multiple consequences. One of its impacts is the increase in heatwave frequency and intensity. The risk is higher for populations living in urban areas, where the highest temperatures are generally identified, due to the urban heat island effect. This phenomenon has recently been taken into account by local elected officials. As a result, developers have decided to use solutions in redevelopment projects to combat high temperatures in urban areas. Consequently, the objective is to study the land-surface temperature evolution of six main urban redevelopments in Lyon, France, from 2000 to 2017. Three of them (the Confluence, Kaplan, and Museum sites) were composed of industrial areas that have undergone major transformations and are now tertiary or residential areas. Two sites have been more lightly transformed, particularly by increasing vegetation to reduce heat stress and urban flooding (Dock and Garibaldi Street). Finally, the Groupama Stadium has been built into agricultural and wooded areas. Changes in vegetation cover (NDVI), water (MNDWI), and moisture (NDMI) content, built areas (NDBI) and bare soil (NDBaI) are also monitored. The results show that the Confluence and Kaplan sites were accompanied by a decrease in surface temperature and an increase in vegetation and moisture, whereas the Groupama Stadium displayed a rise in surface temperature and a decrease in vegetation. On the other hand, the Museum, Dock, and Garibaldi sites did not exhibit clear and uniform trends, although an increase in surface temperature was shown in some statistical tests. The disparity of the results shows the necessity to include a significant amount of vegetation during redevelopment operations in order to reduce heat stress. View Full-Text
Keywords: urban heat island; urban-renewal projects; land-surface temperature; spectral indices; Landsat urban heat island; urban-renewal projects; land-surface temperature; spectral indices; Landsat
►▼ Show Figures 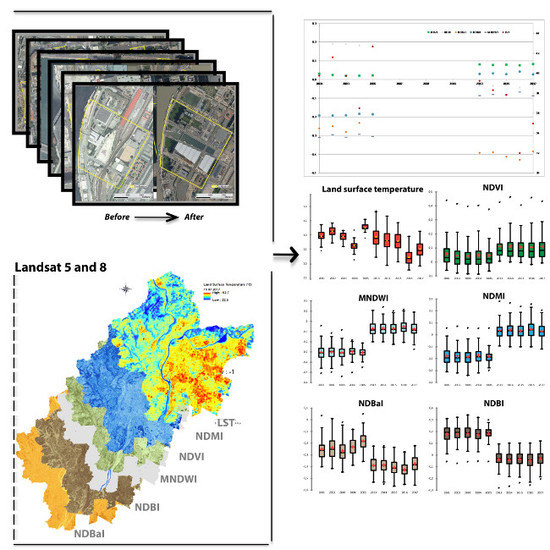