This experiment was carried out within the Sugar Research Australia (SRA) regional breeding program in Burdekin, Queensland, Australia (19°34.0926′ S 147°19.3842′ E). A stage 2 variety selection trial, termed clonal assessment trial, was established with 2134 clones in August 2016. The clones were vegetatively propagated and planted using a whole stick planter in 6 m single-row plots with a row-spacing of 1.52 m and plots within a row separated by 0.5 m. Two replicates of each clone were in a randomised complete block design. Regional sugar industry best management practices were followed for irrigation, fertiliser applications, and weed and pest control. The experiment received 0.5 ML/ha of water at each irrigation event through furrows at approximately three-week intervals. To obtain cane yield, each single-row plot was harvested (single-row yield) with a commercial harvester and weighed using an electronic weigh bin in September 2017. The harvested crop was ratooned (regrown from the crop stubble for the next crop cycle) twice. Weather data for the growing period was obtained from a ‘Bureau of Meteorology’ weather station approx. 8 km away from the field experiment (longpaddock.qld.gov.au/silo/).

A four-row field experiment was established in July 2017 with a population of 40 genetically diverse genotypes containing both commercial and unselected clones in 3 replicates in a randomised block design; an unselected clone and 4 commercial genotypes were in common with the single-row experiment. Each experimental plot was 11 m long and 4 rows wide with a row spacing of 1.52 m and plot spacing of 0.5 m. This experiment was also located in Burdekin (19°35.9485′ S 147°18.0538′ E) and was maintained like the single-row experiment. In July 2018, the middle two rows of each plot were mechanically harvested to estimate pure-stand yield [7].

A sub-population of 75 clones in two replications (150 plots) within the single-row experiment was used for comparing manual measurements of plant height, stalk number, and early biomass with UAV estimates. Manual and UAV data were collected simultaneously from the sub-population in February 2017, approximately six months after planting.
Early biomass was determined by harvesting a sub-sample of 6 stalks from each plot, partitioned to leaf and stem portions and dried in an oven at 60 °C until constant weight. The product of total leaf and stem dry weights and the number of stalks per plot was calculated to estimate early biomass per plot.
Stalk number, an important yield determining trait in sugarcane [28], was manually counted in each 6 m plot of the sub-population. Plant height was measured manually using a ruler in a sub-sample of 4 plants per plot in the sub-population.

A customised quadcopter (DJI Matrice 100) with a flight time of 15 min and a payload capacity of approx. 1.2 kg was used. Date and time, height, and ground sampling distance (GSD) of each UAV flight is shown in Table 1. Sixteen flights were conducted in the single-row experiment from November 2016 to December 2018, involving a plant crop and two ratoon crops. In the multi-row experiment, three flights were conducted at the 4- and 6-months stage in the plant crop, which provided data for estimating early-stage indirect traits genetic correlation with the pure-stand yield.
Multispectral images were captured using a five narrow-band camera (MicaSense, Inc., USA); the bands centred at 475 nm, 560 nm, 668 nm, 717 nm, and 840 nm corresponding to the blue, green, red, red edge, and near-infrared (NIR) regions, respectively. Images of a calibration panel captured before and after each flight along with a sun irradiance sensor mounted on the UAV were used for calibrating multispectral images. Thermal images were captured using a FLIR TAU2 640 (13 mm) camera that captures images in the long-wave infrared region (7.5 µm to 13.5 µm) at a resolution of 640 × 512 pixels. The camera was integrated with a capture board (TeAx ThermalCapture, Germany) that records and stores temperature and location data onto a removable flash memory card on-board the UAV as well as perform automatic flat-field corrections. The UAV was customised to carry two cameras at a time; therefore, in each flight, visual and either multispectral or thermal images were captured simultaneously.
The UAV was programmed to fly autonomously along a pre-defined single grid path controlled by a ground control station. The UAV mission plan was optimised by varying flight height and speed in order to capture the experimental area within the 15 min flight time, with a GSD less than 5 and 8 cm for the multispectral and thermal camera, respectively, and a minimum overlap of 80% in both X and Y directions. The multispectral and visual cameras captured images at one-second intervals while the thermal camera acquired video at a rate of 9 Hz.
To geo-rectify the images, 6 highly visible ground control points (GCP) were placed in the corners of the experimental block. Coordinates of the GCP were obtained using a global navigation satellite systems (GNSS) receiver connected to a correction network (HxGN SmartNet, Australia) for receiving horizontal and vertical position accuracy of less than 2 cm.

Individual thermal images were extracted from the thermal video after applying a thermal drift compensation and non-uniformity correction following manufacture instructions (TeAX Technology, Germany). Thermal, multispectral, and visual images were triangulated and mosaicked using a photogrammetric software (Pix4dMapper, Switzerland) based on the structure from motion algorithm to generate an orthomosaic of the experimental field. The orthomosaic images were geo-rectified using the GCP captured within the experimental block.
A digital terrain model (DTM) of bare earth was generated from visual imagery of the first flight after planting, and a digital surface model (DSM) was generated for each flight from visual imagery in Pix4dMapper. Canopy height at each flight was estimated as the difference in DSM to the average DTM.
Canopy cover was estimated from the visual orthomosaic by classifying the orthomosaic to vegetation, soil, and other background using the support vector machine (SVM) algorithm in ENVI 5.5 (Exelis Visual Information Solutions, Boulder, Colorado). In this method, vegetation and background pixels on the visual orthomosaic were specified manually to train the algorithm, and subsequently, all pixels in the orthomosaic were segmented into vegetation and background.
Spectral index NDVI was calculated from the 5 band multispectral images using the NIR and red band reflectance, as shown in Equation (1).
To estimate canopy temperature, the temperature of pixels corresponding to the classified vegetation pixels were extracted from the thermal orthomosaic, and subsequently, Otsu thresholding was applied to remove any mixed pixels (pixels with both vegetation and background) [29].
Individual plot boundaries were identified on the orthomosaic by segmenting the experimental field into regularly shaped plot polygons along with a buffer around the plots to minimise neighbouring plot edge effects based on a supplied field experimental design, similar to the method described in Haghighattalab et al. [30]. Mean and other zonal statistics from each plot polygon were extracted from the underlying orthomosaic. The segmentation and zonal statistics operations were performed in R [31].

Variance and covariance of all traits were estimated using restricted maximum likelihood (REML) method in the lme4 package in R [32]. The following statistical model was used to partition the variance components:
Yij = μ + gi + bj + eij
where Yij is the observed value of the ith genotype in jth block; μ is the mean of observations; gi is the effect of the ith genotype; bj is the effect of jth block, and eij is experimental error. Best linear unbiased predictors (BLUP) were estimated for each trait and genotype from the model in Equation (2) using the ‘ranef’ (random effect) command in the lme4 package [32].
The genetic coefficient of variation (GCV %) was calculated as: where σg is the square root of genetic variance, and is the mean.
Genetic and error variances were estimated, and broad-sense heritability (H2b) from the genotype plot means was estimated for each of the measurements, as described by Fehr [33]: where σ2g and σ2e are genetic and error variances, and nr is the number of replications.
Genetic correlations between traits were estimated using the method in Kempthorne [34]: where Covg(xy) is the genetic covariance of the two traits (x and y), and σ2gx and σ2gy are the genetic variances of the two traits, x and y, respectively.

Principal component analysis (PCA) was performed for the top 10% of clones (250) selected using the single-row yield based selection. PCA was performed using the ‘princomp’ function in R [31], and a PCA biplot was generated in SigmaPlot (Systat Software Inc.). A correlation matrix of the indirect traits (canopy height, canopy cover, NDVI, and canopy temperature) and single-row yield were entered in the analysis. A PCA biplot was constructed by plotting the PC1 score against the PC2 score for each clone and trait. The aim of the analysis was to examine the relationship among the indirect traits and single-row yield of clones to evaluate their relative growth and transpiration characteristics.

In general, weather patterns in Burdekin, the experimental location, followed typical conditions for tropical sugarcane growing regions. During winter and summer months, maximum temperatures and vapour pressure deficits were approximately 25 °C and 35 °C, and 1 kPa to 3 kPa, respectively. Annual rainfall followed the typical regional pattern of higher precipitation during summer and early autumn (December to April) and much lower rainfall in winter and spring (May to November) (Figure 1). Aerial data was collected on cloud-free clear sky days with wind speed less than 10 km/hr.

3.2. Ground-Truth Validation on Sub-Population of 75 Clones in the Single-Row Experiment

3.3. Variance, Heritability, and Genetic Correlation in the Single-Row Experiment

Indirect traits estimated in the multi-row experiment had high heritability except for the measurement in August, at which stage differences in canopy height were less discriminating (Table 7). The indirect traits also showed significantly high genetic correlation with pure-stand yield based on both individual measurement days (Table 7) and combined across days (Table 8). NDVI had the highest genetic correlation with pure-stand yield, followed by canopy cover and canopy height (Table 8).

3.7. PCA Biplot of the Top 10% Clones Selected Based on Single-Row Yield

The first two principal components explained 70% of the total variation (Figure 3). The single-row yield had a moderate positive correlation with NDVI, canopy height, and canopy cover indicated by the narrow angle between the trait vectors. Canopy temperature was not associated with either yield or other indirect traits. Trait vectors for canopy temperature and canopy height were approximately opposite each other, which indicates the negative association between these two traits. The first principal component (PC 1) had high and approximately equal loadings for NDVI (0.8) and canopy height (0.83), and slightly less loading for single-row yield (0.66), which suggests PC 1 is mostly associated with growth and yield-related traits. Whereas, the second principal component (PC 2) was associated mostly to canopy temperature (0.75) and to a lesser extent with canopy cover (0.66). The biplot provides a visual assessment of the top performing clones association with related indirect traits. For instance, the commercial clone Q232 in the biplot was associated with high yield and low canopy temperature. Whereas, the test clones QA14-2583 and QA14-3041 had a higher yield and also higher canopy temperature relative to Q232, which indicates that the test clones QA14-2583 and QA14-3041 were as productive as the commercial Q232 but with less transpiration, suggesting that these test clones are more suitable for water-limited environments.

Rapid developments in phenomics technologies could be utilised to improve early-stage selection in sugarcane breeding programs. This paper demonstrated the effectiveness of a high throughput phenotyping system that can be adapted to capture and use indirect yield-related traits for clone selection from early-stage selection trials. The indirect traits in the single-row experiment had high heritability and higher response to selection for the pure-stand yield than the single-row yield currently used for selection. These results suggest that UAV-assisted high-throughput phenotyping of important indirect traits and integrating it in an indirect selection index is an effective strategy for improving clonal selections and genetic gains in early-stage sugarcane breeding trials. 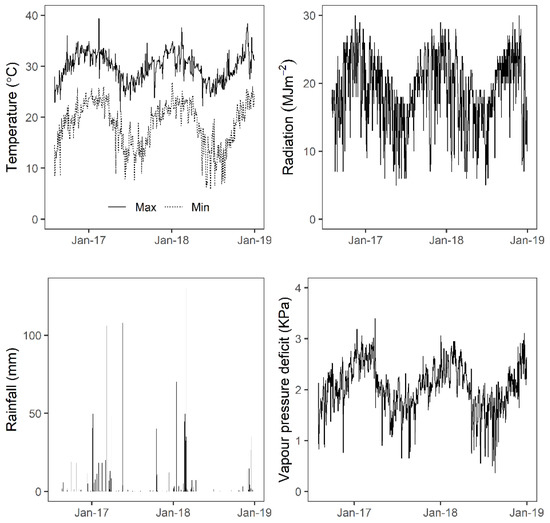 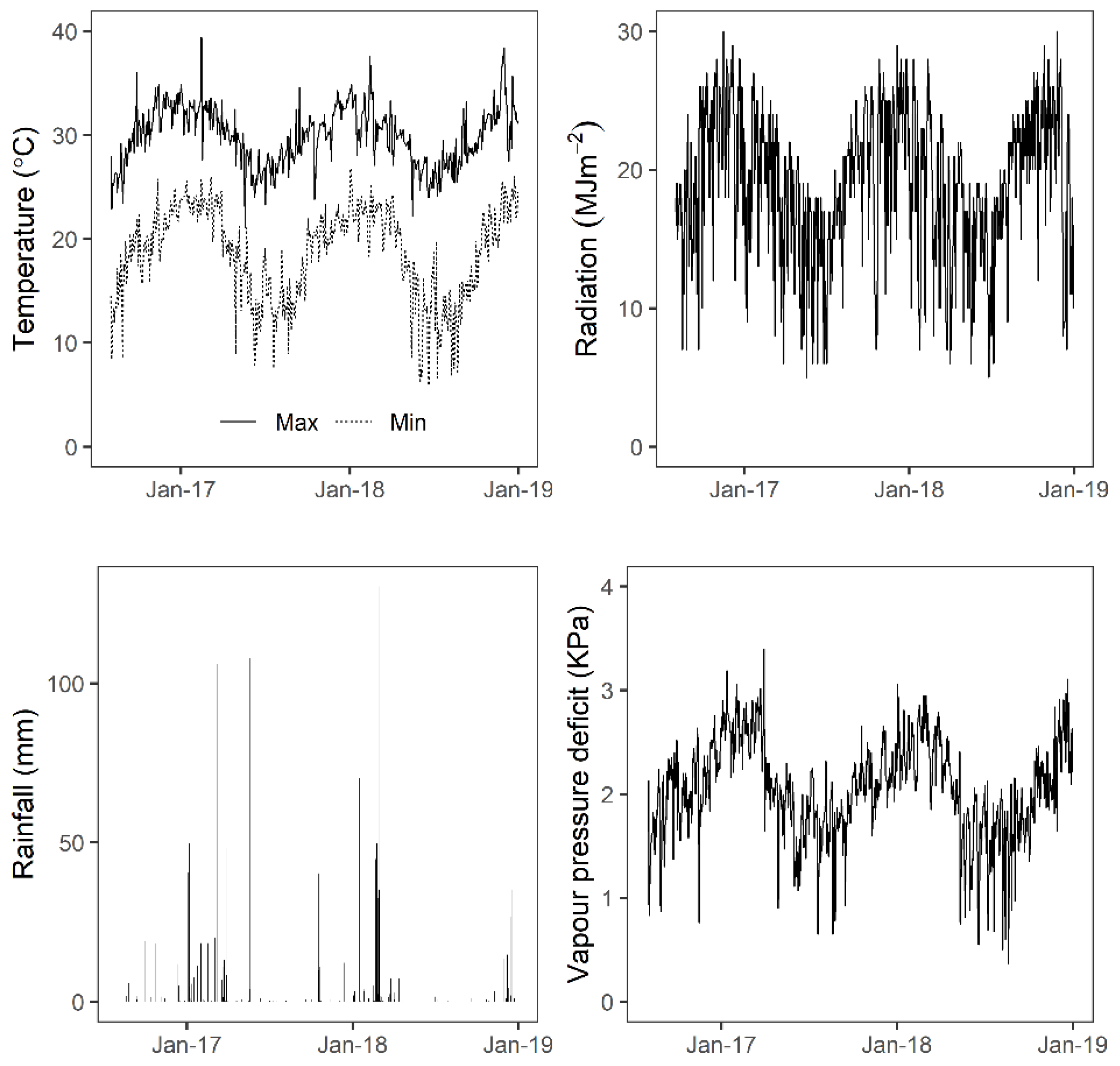 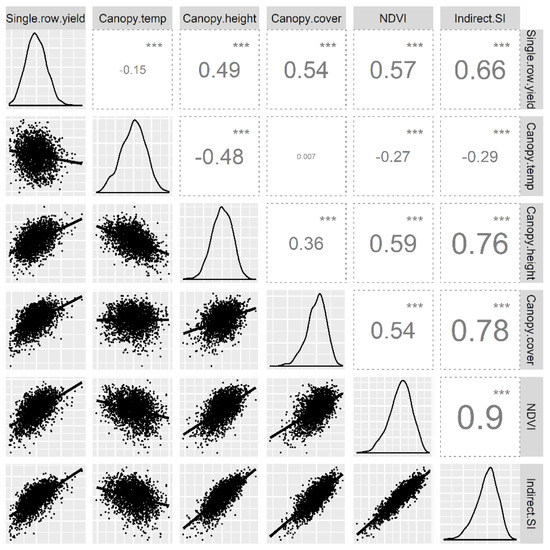 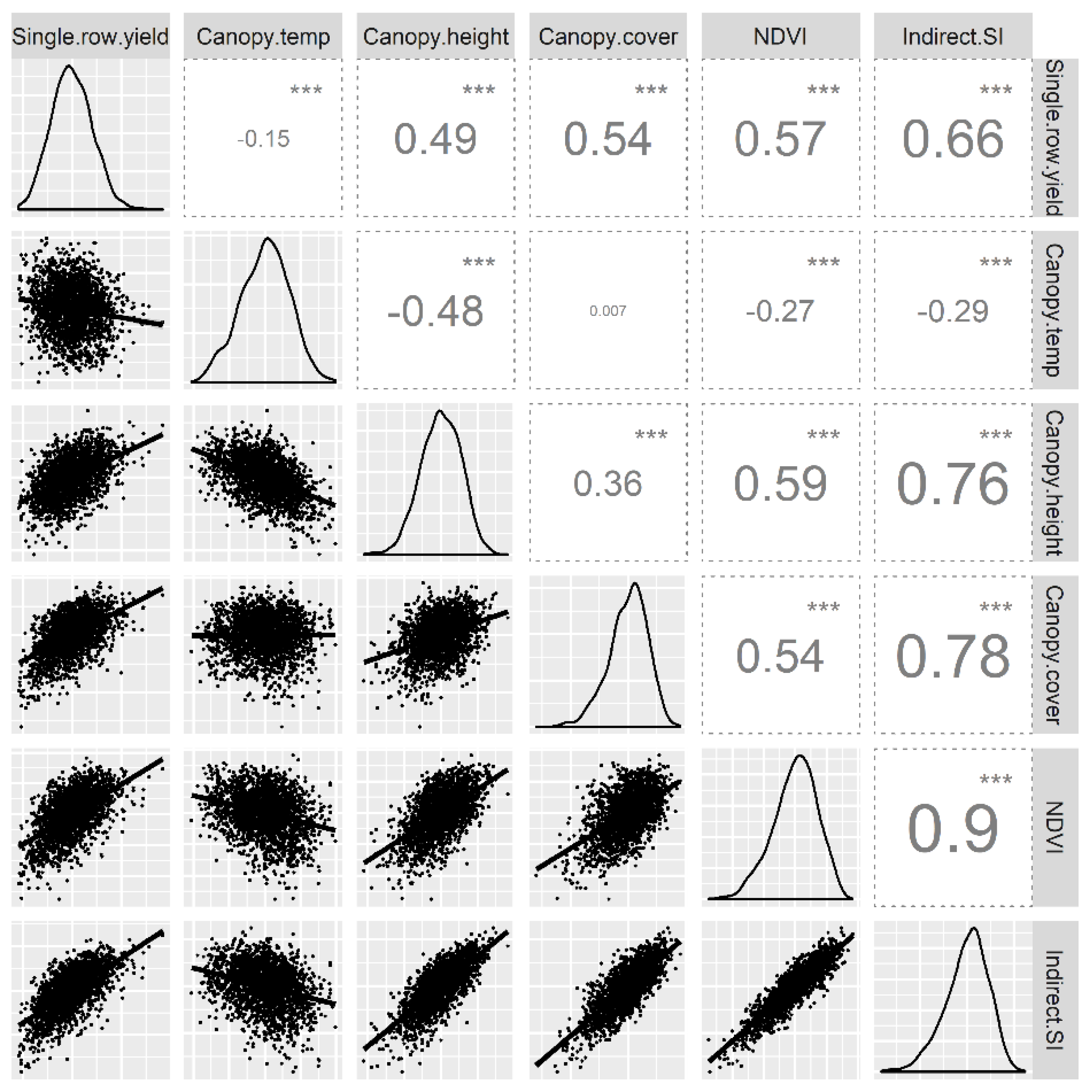 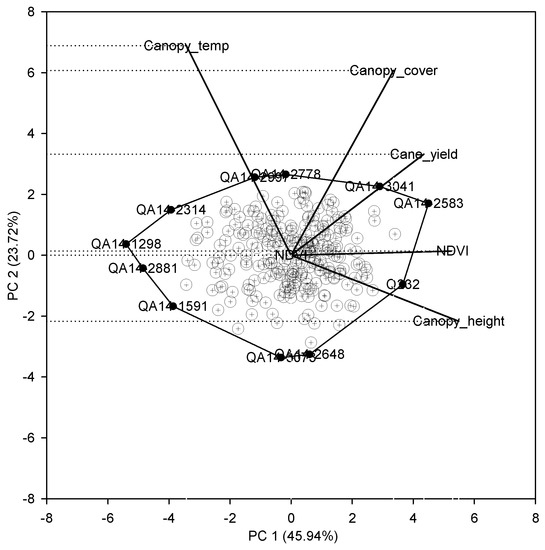 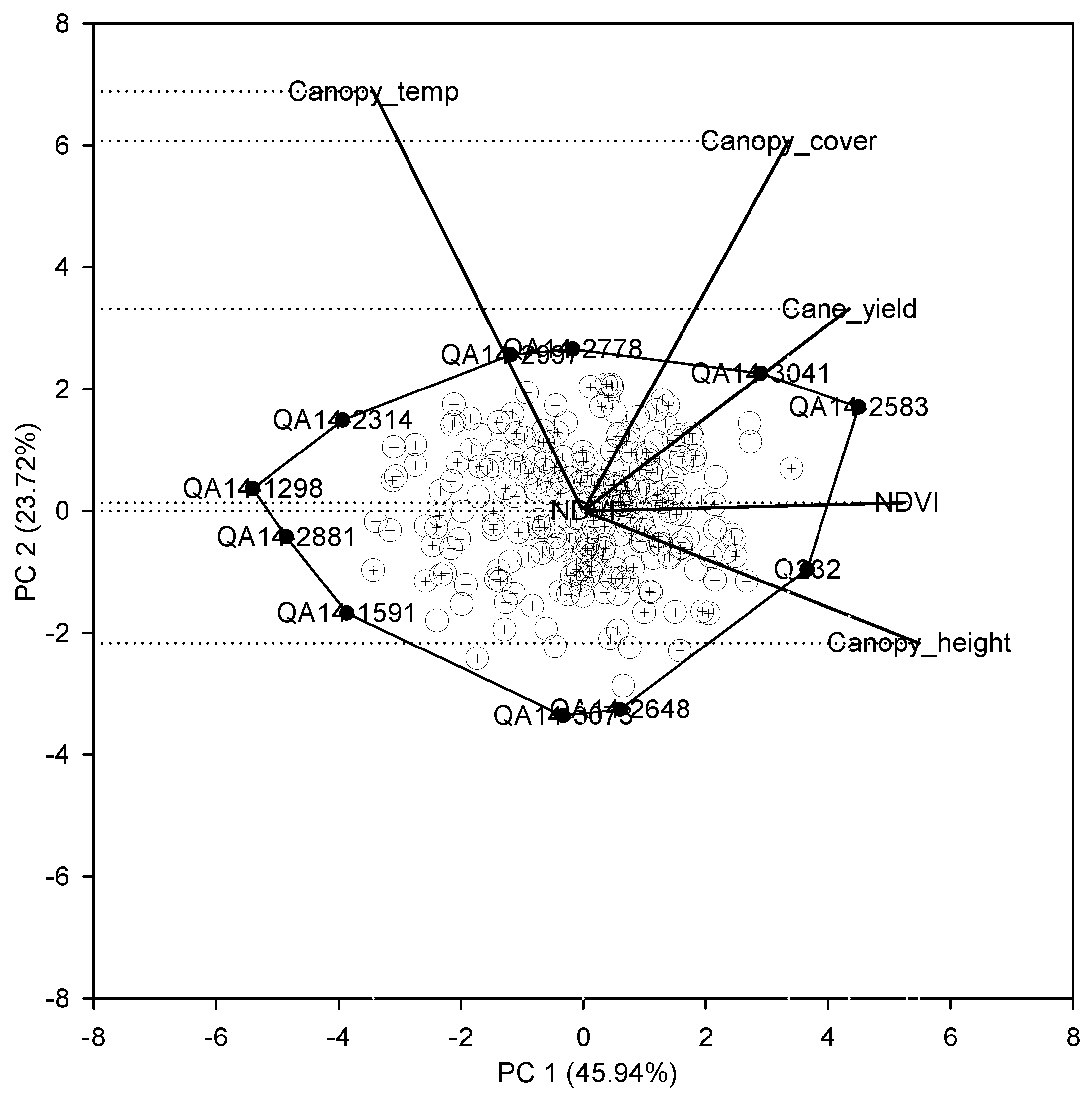