Improving plant photosynthesis provides the best possibility for increasing crop yield potential, which is considered a crucial effort for global food security. Chlorophyll fluorescence is an important indicator for the study of plant photosynthesis. Previous studies have intensively examined the use of spectrometer, airborne, and spaceborne spectral data to retrieve solar induced fluorescence (SIF) for estimating gross primary productivity and carbon fixation. None of the methods, however, had a spatial resolution and a scanning throughput suitable for applications at the canopy and sub-canopy levels, thereby limiting photosynthesis analysis for breeding programs and genetics/genomics studies. The goal of this study was to develop a hyperspectral imaging approach to characterize plant photosynthesis at the canopy level. An experimental field was planted with two cotton cultivars that received two different treatments (control and herbicide treated), with each cultivar-treatment combination having eight replicate 10 m plots. A ground mobile sensing system (GPhenoVision) was configured with a hyperspectral module consisting of a spectrometer and a hyperspectral camera that covered the spectral range from 400 to 1000 nm with a spectral sampling resolution of 2 nm. The system acquired downwelling irradiance spectra from the spectrometer and reflected radiance spectral images from the hyperspectral camera. On the day after 24 h of the DCMU (3-(3,4-dichlorophenyl)-1,1-dimethylurea) application, the system was used to conduct six data collection trials in the experiment field from 08:00 to 18:00 with an interval of two hours. A data processing pipeline was developed to measure SIF using the irradiance and radiance spectral data. Diurnal SIF measurements were used to estimate the effective quantum yield and electron transport rate, deriving rapid light curves (RLCs) to characterize photosynthetic efficiency at the group and plot levels. Experimental results showed that the effective quantum yields estimated by the developed method highly correlated with those measured by a pulse amplitude modulation (PAM) fluorometer. In addition, RLC characteristics calculated using the developed method showed similar statistical trends with those derived using the PAM data. Both the RLC and PAM data agreed with destructive growth analyses. This suggests that the developed method can be used as an effective tool for future breeding programs and genetics/genomics studies to characterize plant photosynthesis at the canopy level. View Full-Text
Keywords: solar induced fluorescence; cotton; maximal fluorescence estimation; growth analysis solar induced fluorescence; cotton; maximal fluorescence estimation; growth analysis
►▼ Show Figures 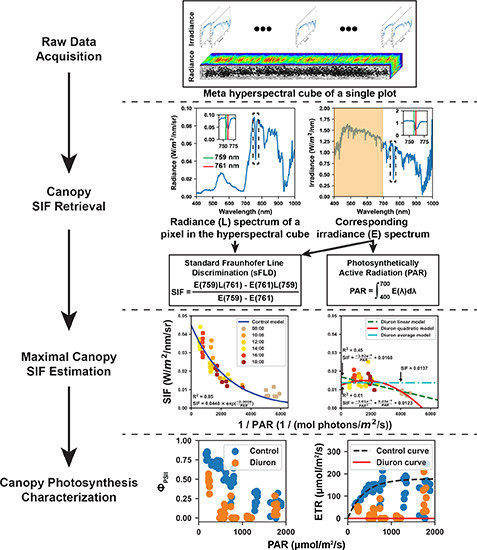