Recently, different algorithms have been developed to assess near-surface particulate organic matter (POC) concentration over coastal waters. In this study, we gathered an extensive in situ dataset representing various contrasted bio-optical coastal environments at low, medium, and high latitudes, with various bulk particulate matter chemical compositions (mineral-dominated, 50% of the data set, mixed, 40%, or organic-dominated, 10%). The dataset includes 606 coincident measurements of POC concentration and remote-sensing reflectance, Rrs, with POC concentrations covering three orders of magnitude. Twelve existing algorithms have then been tested on this data set, and a new one was proposed. The results show that the performance of historical algorithms depends on the type of water, with an overall low performance observed for mineral-dominated waters. Furthermore, none of the tested algorithms provided satisfactory results over the whole POC range. A novel approach was thus developed based on a maximum band ratio of Rrs (red/blue, red/yellow or red/green ratio). Based on the standard statistical metric for the evaluation of inverse models, the new algorithm presents the best performance. The root-mean square deviation for log-transformed data (RMSDlog) is 0.25. The mean absolute percentage difference (MAPD) is 37.48%. The mean bias (MB) and median ratio (MR) values are 0.54 μg L−1 and 1.02, respectively. This algorithm replicates quite well the distribution of in situ data. The new algorithm was also tested on a matchup dataset gathering 154 coincident MERIS (MEdium Resolution Imaging Spectrometer) Rrs and in situ POC concentration sampled along the French coast. The matchup analysis showed that the performance of the new algorithm is satisfactory (RMSDlog = 0.24, MAPD = 34.16%, MR = 0.92). A regional illustration of the model performance for the Louisiana continental shelf shows that monthly mean POC concentrations derived from MERIS with the new algorithm are consistent with those derived from the 2016 algorithm of Le et al. which was specifically developed for this region. View Full-Text
Keywords: particulate organic carbon; ocean color; remote sensing; coastal waters; bio-optical algorithm particulate organic carbon; ocean color; remote sensing; coastal waters; bio-optical algorithm
►▼ Show Figures 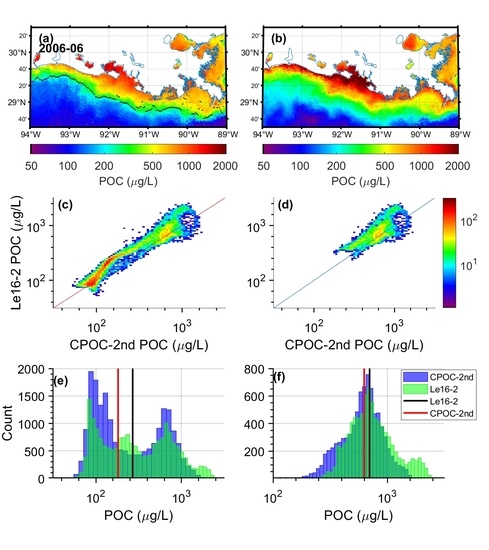