The temporal resolution of satellite determines how well remote sensing products represent changes in the lake environments and influences the practical applications by end-users. Here, a resampling method was used to reproduce the suspended particulate matter (SPM) dataset in 43 large lakes (>50 km2) on the eastern China plain during 2003–2017 at different temporal resolutions using MODIS Aqua (MODISA) based on Google Earth Engine platform, then to address the impact of temporal resolution on the long-term SPM dataset. Differences between the MODISA-derived and reproduced SPM dataset at longer temporal resolution were higher in the areas with large water dynamics. The spatial and temporal distributions of the differences were driven by unfavorable observation environments during satellite overpasses such as high cloud cover, and rapid changes in water quality, such as water inundation, algae blooms, and macrophytes. Furthermore, the annual mean difference in SPM ranged from 5–10% when the temporal difference was less than 10 d, and the differences in summer and autumn were higher than that of other seasons and surpassed 20% when the temporal resolution was more than 16 d. To assure that difference were less than 10% for long-term satellite-derived SPM datasets, the minimal requirement of temporal resolution should be within 5 d for most of the inland lakes and 3 d for lakes with large changes in water quality. This research can be used to not only evaluate the reliability of historically remote sensing products but also provide a reference for planning field campaigns and applying of high spatial resolution satellite missions to monitor aquatic systems in the future. View Full-Text
Keywords: lakes; SPM; Google Earth Engine; revisit time lakes; SPM; Google Earth Engine; revisit time
►▼ Show Figures 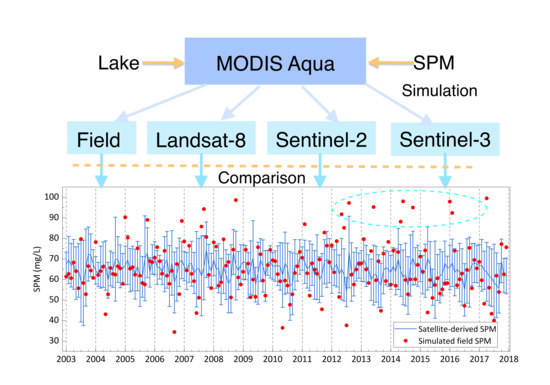