A Review of Progress and Applications of Pulsed Doppler Wind LiDARs

The Earth-viewed images acquired by the space probe OSIRIS-REx during its Earth gravity assist flyby maneuver on 22 September 2017 provided an opportunity to radiometrically calibrate the onboard NavCam imagers. Spatially-, temporally-, and angularly-matched radiances from the Earth viewing GOES-15 and DSCOVR-EPIC imagers were used as references for deriving the calibration gain of the NavCam sensors. An optimized all-sky tropical ocean ray-matching (ATO-RM) calibration approach that accounts for the spectral band differences, navigation errors, and angular geometry differences between NavCam and the reference imagers is formulated in this paper. Prior to ray-matching, the GOES-15 and EPIC pixel level radiances were mapped into the NavCam field of view. The NavCam 1 ATO-RM gain is found to be 9.874 × 10−2 Wm−2sr−1µm−1DN−1 with an uncertainty of 3.7%. The ATO-RM approach predicted an offset of 164, which is close to the true space DN of 170. The pre-launch NavCam 1 and 2 gains were compared with the ATO-RM gain and were found to be within 2.1% and 2.8%, respectively, suggesting that sensor performance is stable in space. The ATO-RM calibration was found to be consistent within 3.9% over a factor of ±2 NavCam 2 exposure times. This approach can easily be adapted to inter-calibrate other space probe cameras given the current constellation of geostationary imagers. View Full-Text
Keywords: calibration; OSIRIS-REx; NavCam; ray-matching; SBAF; GOES-15; DSCOVR-EPIC calibration; OSIRIS-REx; NavCam; ray-matching; SBAF; GOES-15; DSCOVR-EPIC
►▼ Show Figures 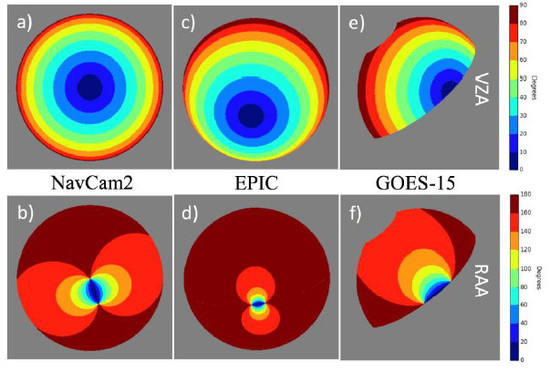