Spatio–Temporal Analysis of Deformation at San Emidio Geothermal Field, Nevada, USA Between 1992 and 2010

On 28 September 2018, an Mw 7.4 earthquake, followed by a tsunami, struck central Sulawesi, Indonesia. It resulted in serious damage to central Sulawesi, especially in the Palu area. Two descending paths of the Advanced Land Observation Satellite 2 (ALOS-2) synthetic aperture radar (SAR) data were processed with interferometric synthetic aperture radar (InSAR) and pixel tracking techniques to image the coseismic deformation produced by the earthquake. The deformation measurement was used to determine the fault geometry and the coseismic distributed slip model with a constrained least square algorithm based on the homogeneous elastic half-space model. We divided the fault into four segments (named AS, BS, CS and DS, from the north to the south) in the inversion. The BS segment was almost parallel to the DS segment, the CS segment linked the BS and DS segments, and these three fault segments formed a fault step-over system. The Coulomb failure stress (CFS) change on the causative fault was also calculated. Results show that the maximum SAR line-of-sight (LOS) and horizontal deformation were −1.8 m and 3.6 m, respectively. The earthquake ruptured a 210-km-long fault with variable strike angles. The ruptured pattern of the causative fault is mainly a sinistral slip. Almost-pure normal characteristics could be identified along the fault segment across the Palu bay, which could be one of the factors resulting in the tsunami. The main slip area was concentrated at the depths of 0–20 km, and the maximum slip was 3.9 m. The estimated geodetic moment of the earthquake was 1.4 × 1020 Nm, equivalent to an earthquake of Mw 7.4. The CFS results demonstrate that the fault step-over of 5.3 km width did not terminate the rupture propagation of the main shock to the south. Two M>6 earthquakes (the 23 January 2005 and the 18 August 2012) decreased CFS along CS segment and the middle part of DS segment of the 2018 main shock. This implies that the stress release during the previous two earthquakes may have played a vital role in controlling the coseismic slip pattern of the 2018 earthquake. View Full-Text
Keywords: Palu earthquake; InSAR; coseismic slip model; source characteristics; step-over Palu earthquake; InSAR; coseismic slip model; source characteristics; step-over
►▼ Show Figures 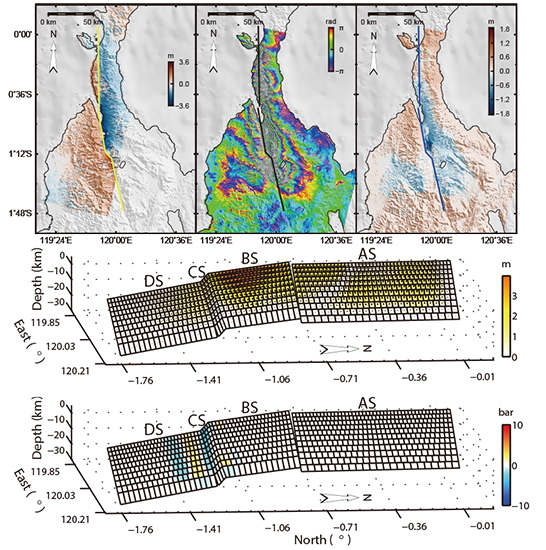