The Southern Ocean (SO) is highly sensitive to climate change. Therefore, an accurate estimate of phytoplankton biomass is key to being able to predict the climate trajectory of the 21st century. In this study, MODerate resolution Imaging Spectroradiometer (MODIS), on board EOS Aqua spacecraft, Level 2 (nominal 1 km × 1 km resolution) chlorophyll-a (C) and Particulate Organic Carbon (POC) products are evaluated by comparison with an in situ dataset from 11 research cruises (2008–2017) to the SO, across multiple seasons, which includes measurements of POC and chlorophyll-a (C) from both High Performance Liquid Chromatography (C) and fluorometry (C). Contrary to a number of previous studies, results highlighted good performance of the algorithm in the SO when comparing estimations with HPLC measurements. Using a time window of ±12 h and a mean satellite chlorophyll from a 5 × 5 pixel box centered on the in situ location, the median C:C ratios were 0.89 (N = 46) and 0.49 (N = 73) for C and C respectively. Differences between C and C were associated with the presence of diatoms containing chlorophyll-c pigments, which induced an overestimation of chlorophyll-a when measured fluorometrically due to a potential overlap of the chlorophyll-a and chlorophyll-c emission spectra. An underestimation of ∼0.13 mg m was observed for the global POC algorithm. This error was likely due to an overestimate of in situ POC measurements from the impact of dissolved organic carbon not accounted for in the blank correction. These results highlight the important implications of different in situ methodologies when validating ocean colour products. View Full-Text
Keywords: remote sensing; ocean color; algorithm; chlorophyll; HPLC; fluorometry; particulate organic carbon; southern ocean remote sensing; ocean color; algorithm; chlorophyll; HPLC; fluorometry; particulate organic carbon; southern ocean
►▼ Show Figures 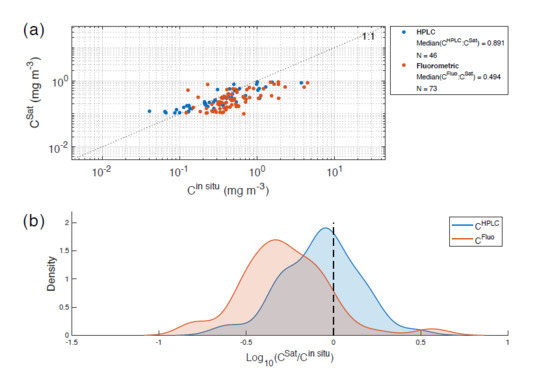