Forests are an important part natural ecosystems, by for example providing food, fiber, habitat, and biodiversity, all of which contribute to stable natural systems. Assessing and modeling the structure and characteristics of forests, e.g., Leaf Area Index (LAI), volume, biomass, etc., can lead to a better understanding and management of these resources. In recent years, Terrestrial Laser Scanning (TLS) has been recognized as a tool that addresses many of the limitations of manual and traditional forest data collection methods. In this study, we propose a density-based approach for estimating the LAI in a structurally-complex forest environment, which contains variable and diverse structural attributes, e.g., non-circular stem forms, dense canopy and below-canopy vegetation cover, and a diverse species composition. In addition, 242 TLS scans were collected using a portable low-cost scanner, the Compact Biomass Lidar (CBL), in the Hawaii Volcanoes National Park (HAVO), Hawaii Island, USA. LAI also was measured for 242 plots in the site, using an AccuPAR LP-80 ceptometer. The first step after cleaning the point cloud involved detecting the higher forest canopy in the light detection and ranging (lidar) point clouds, using normal change rate assessment. We then estimated Leaf Area Density (LAD), using a voxel-based approach, and divided the canopy point cloud into five layers in the Z (vertical) direction. These five layers subsequently were divided into voxels in the X direction, where the size of these voxels were obtained based on inter-quartile analysis and the number of points in each voxel. We hypothesized that the intensity returned to the lidar system from woody materials, like branches, would be higher than from leaves, due to the liquid water absorption feature of the leaves and higher reflectance for woody material at the 905 nm laser wavelength. We also differentiated between foliar and woody materials using edge detection in the images from projected point clouds and evaluated the density of these regions to support our hypothesis. Density of points, or the number of points divided by the volume of a grid, in a 3D grid size of 0.1 m, was calculated for each of the voxels. The grid size was determined by investigating the size of the branches in the lower portion of the canopy. Subsequently, we fitted a Kernel Density Estimator (KDE) to these values, with the threshold set based on half of the area under the curve in each of the density distributions. All the grids with a density below the threshold were labeled as leaves, while those grids above the threshold were identified as non-leaves. Finally, we modeled LAI using the point densities derived from the TLS point clouds and the listed analysis steps. This model resulted in an value of 0.88. We also estimated the LAI directly from lidar data using the point densities and calculating LAD, which is defined as the total one-sided leaf area per unit volume. LAI can be obtained as the sum of the LAD values in all the voxels. The accuracy of LAI estimation was 90%, with an RMSE value of 0.31, and an average overestimation of in TLS-derived LAI, when compared to field-measured LAI. Algorithm performance mainly was affected by the vegetation density and complexity of the canopy structures. It is worth noting that, since the LAI values cannot be considered spatially independent throughout all the plots in this site, we performed semivariogram analysis on the field-measured LAI data. This analysis showed that the LAI values can be assumed to be independent in plots that are at least 30 m apart. As a result, we divided the data into six subsets in which the plots were 30 m spaced. The values for these subsets, based on modeling of the field-measured LAI using leaf point density values, ranged between 0.84–0.96. The results bode well for using this method for efficient, automatic, and accurate/precise estimation of LAI values in complex forest environments, using a low-cost, rapid-scan TLS. View Full-Text
Keywords: forest structure assessment; terrestrial lidar; leaf area index; Hawaii forest structure assessment; terrestrial lidar; leaf area index; Hawaii
►▼ Show Figures 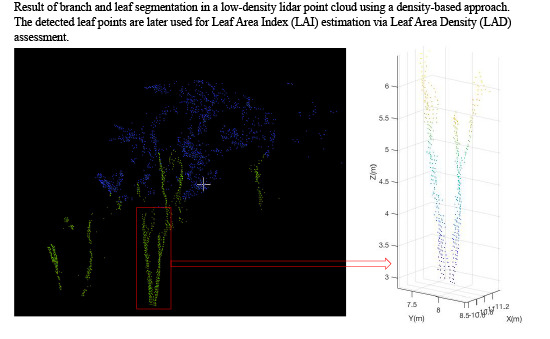