We compare tropospheric delays from Global Navigation Satellite Systems (GNSS) and Synthetic Aperture Radar (SAR) Interferometry (InSAR) in a challenging mountainous environment in the Swiss Alps, where strong spatial variations of the local tropospheric conditions are often observed. Tropospheric delays are usually considered to be an error for both GNSS and InSAR, and are typically removed. However, recently these delays are also recognized as a signal of interest, for example for assimilation into numerical weather models or climate studies. The GNSS and InSAR are techniques of complementary nature, as one has sparse spatial but high temporal resolution, and the other very dense spatial coverage but repeat pass of only a few days. This raises expectations for a combination of these techniques. For this purpose, a comprehensive comparison between the techniques must be first performed. Due to the relative nature of InSAR estimates, we compare the difference slant tropospheric delays () retrieved from GNSS with the s estimated using Persistent Scatterer Interferometry (PSI) of 32 COSMO-SkyMed SAR images taken in a snow-free period from June to October between 2008 and 2013. The GNSS estimates calculated at permanent geodetic stations are interpolated to the locations of persistent scatterers using an in-house developed least-squares collocation software COMEDIE. The Pearson’s correlation coefficient between InSAR and GNSS estimates averaged over all acquisitions is equal to 0.64 and larger than 0.8 for approximately half of the layers. Better agreement is obtained mainly for days with high variability of the troposphere (relative to the tropospheric conditions at the time of the reference acquisition), expressed as standard deviations of the GNSS-based s. On the other hand, the most common feature for the days with poor agreement is represented by very stable, almost constant GNSS estimates. In addition, there is a weak correlation between the agreement and the water vapor values in the area, as well as with the number of stations in the closest vicinity of the study area. Adding low-cost L-1 only GPS stations located within the area of the study increases the biases for most of the dates, but the standard deviations between InSAR and GNSS decrease for the limited area with low-cost stations. View Full-Text
Keywords: tropospheric delays; InSAR; GNSS; PSI; low-cost GPS; alpine areas tropospheric delays; InSAR; GNSS; PSI; low-cost GPS; alpine areas
►▼ Show Figures 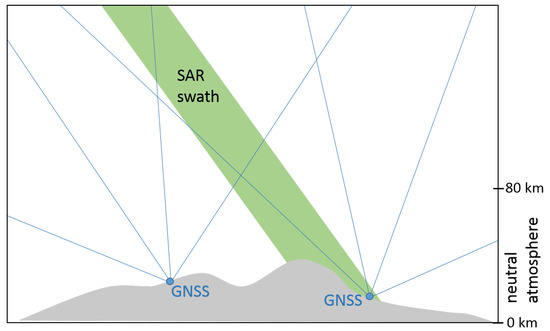