Songnen Plain contains one of the most three largest amounts of heavy soda salt-affected soils in the world. The main salt components of saline soils are NaHCO3 and Na2CO3, which make the soils very sodic [36]. This study was conducted from 2013 to 2014 with all soil samples obtained in 12 towns of Da’an City, which is located on the southwestern Songnen Plain, Jilin Province, China with the geographic coordinates lie between 123°47’35’’E~123°59’55’’E and 45°29’30’’N~45°36’26’’N. The annual mean precipitation of this area is approximately 400~500 mm with 80% occurs between June and September, while the average annual evaporation is about 1400~1900 mm, reaching 3.5 to 4.75 times of precipitation. Moreover, the soil clay content in the study area is quite high, which makes the soil surface shrink and crack very commonly during water evaporation.
After consideration of heterogeneity, 57 composite soil samples of different salinity levels were collected at a depth of 20 cm in July 2013, April and October 2014. Figure 1a,b shows the study area location and the spatial coordinates of all sampling locations recorded using a hand-held GPS. The soil surface from Figure 1c–e indicates that it is very common to crack on the surface of soda saline-alkali soils in Songnen Plain. All soil samples were air-dried, ground, passed through a 2 mm sieve and then divided into three subsamples. The first subsamples were prepared for the physical and chemical properties. The second subsamples were prepared as the block soil samples the third subsamples were prepared as comparison soil samples for spectral collection.

The main ions, such as K+, Na+, Mg2+, Ca2+, Cl−, CO32− and HCO3− were measured in a laboratory. Soil extracts with water/soil mass ratio of 1:5 were used to measure the contents of Na+ and K+ using a flame photometer. The contents of Ca2+ and Mg2+ were determined by the complexometric ethylenediaminetetraacetic acid (EDTA) titration method. The contents of CO32− and HCO3− were obtained based on the double indicator neutralization method. Moreover, EC and pH were also measured by the potentiostatic method and conductometry, using soil suspensions with a soil/water mass ratio of 1:5 [37]. In addition, a Malvern MS-200 laser particle size analyzer was used in this study to determine the contents of clay, silt, and sand of the soil samples [38].

In order to remove the effects of environmental factors, the desiccation cracking process of soda saline-alkali soils was carried out under controlled experimental conditions. Saturated slurry samples were firstly prepared with a mass water content of 80% using the subsamples treated previously. The obtained slurry samples were then well hand-mixed and poured into wooden sample box of 50 cm × 50 cm × 3 cm size with the top flattened by a spatula. Afterwards, all soil samples were subjected in the laboratory with temperature of 25 °C, humidity of 35% and pressure of 101 kPa, and the soil samples were then air-dried until masses no longer decreased, which can be considered as completely dried samples. The gravimetric water contents of the soil samples were then measured. In order to obtain the crack images of soil samples, a digital camera was installed on a fixed experimental platform. The lens of the digital camera was set 1 m above the floor. A 50 cm × 50 cm square area was determined with the projection of the camera lens on the floor as the center, which was used to ensure that the geometric distortion effects were the same for all the samples during the photographing process. Each cracked soil specimen was then placed in the determined square area to be photographed (Figure 2).

The CON is an important GLCM texture feature, which can well express the clarity and reflect the intensity of the texture of adjacent pixels of crack patterns, thus the CON is considered as an important measure of local variations present in crack patterns in this study. The CON can be calculated by the following equation: where p(i,j) represents the second-order combined conditional probability density of gray level i and j, corresponding to the element of GLCM at (i,j) position. For an Lr × Lc grayscale image with gray level of Ng and sampling interval of d pixels, p(i,j)at directions of 0°, 45°, 90°, and 135° can be computed by the following equations separately [39,40,41,42]:
In this study, the crack images were transformed into binary images (Ng = 2) considering the effects of the salt crystals separated out on the surface of soil samples. In detail, to determine the CON of dried soil samples from crack patterns, digital image processing technique was carried out in this study (Figure 3). Firstly, the crack pattern of the cracked soil samples was geometry corrected using polynomial methods and cropped (Figure 3a).After that, the corrected color image was transformed into a gray image (Figure 3b).Thirdly, the grayscale image was binarized using a threshold (Figure 3c) and then inversed for further processing (Figure 3d), which indicated that the crack pattern was segmented into white crack areas and black block areas. Finally, the open operation was then performed with a given threshold to reduce the small spot noise in every binary image (Figure 3e). After the above processes, a distance of 40 pixels was selected as sampling interval in order to fully preserve the GLCM texture information and reduce the computational complexity, the mean CON texture features of all cracked soil samples were then computed based on the CON computed from GLCMs in 0°, 45°, 90°, and 135° directions [43].

Table 1 lists the statistical characteristics of the soil properties of soil samples. The total salinity is the sum of ion content. Na+ is the main cation while HCO3− and CO32− are the main anions. Table 1 shows that the EC of the experimental samples ranges from 0.06 ds/m to 3.39 ds/m and the pH of the experimental samples ranges from 8.01 to 10.77, indicating that all the soil samples exhibit alkaline characteristics [44]. Table 1 also shows that there are significant differences in the overall salinity among the soil samples. The salinity of the experimental samples ranges from 1.06 mg/g to 29.73 mg/g, and the ion contents also indicate relatively large differences among different samples. In addition, the standard deviation and coefficient of variation shows that there are relatively large differences in the salt parameters in all the soil samples, in particular, the Cl− content, Na+ content, CO32− content, HCO3− content, ECs and salinity all have large coefficients of variation, indicating that the sample point selection accurately reflects the distribution range of the salt parameters. Furthermore, the differences of particle size distributions of the soil samples are very small especially for those particles with clay content <0.005mm, the CV and standard are 5.49% and 1.54 mg/g, which means no significant differences were observed in the clay content for the soil samples.

Figure 4 shows the distributions of the CON texture feature calculated from the crack images of soil samples, which indicates a very large heterogeneity among different soil samples with CON ranges from 0.007 to 0.342.

In this study, a cracking experiment was carried out on 57 samples of soda saline-alkali soil in the Songnen Plain of China. A procedure was studied to improve soil property estimation of soda saline-alkali soil based on spectral measurement considering the CON texture feature of the soil surface with cracks. The spectral response of the block soil samples separated by crack regions and the 2 mm comparison soil samples with different soil properties was analyzed and compared. After that, univariate and multivariate linear regression models were developed for four main soil properties of interest including Na+, EC, pH and total salinity based on the original reflectance and the mixed reflectance considering the CON texture feature for the block soil samples and the comparison soil samples respectively. The main conclusions in this investigation are as follows:

This research was supported by the National Natural Science Foundation of China (No. 41601382), the Fundamental Research Funds for the Central Universities of China (No. 2017-KYYWF-0145) and the University Nursing Program for Young Scholars with Creative Talents in Heilongjiang Province of China (No. UNPYSCT-2018180).

We are very grateful for the assistance in the soil property measurement provided by Zhichun Wang from the Da’an Alkaline Ecological Experimental Station, Chinese Academy of Sciences. 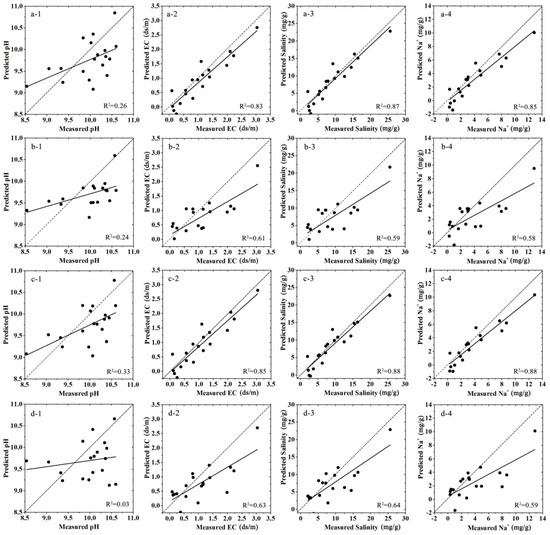 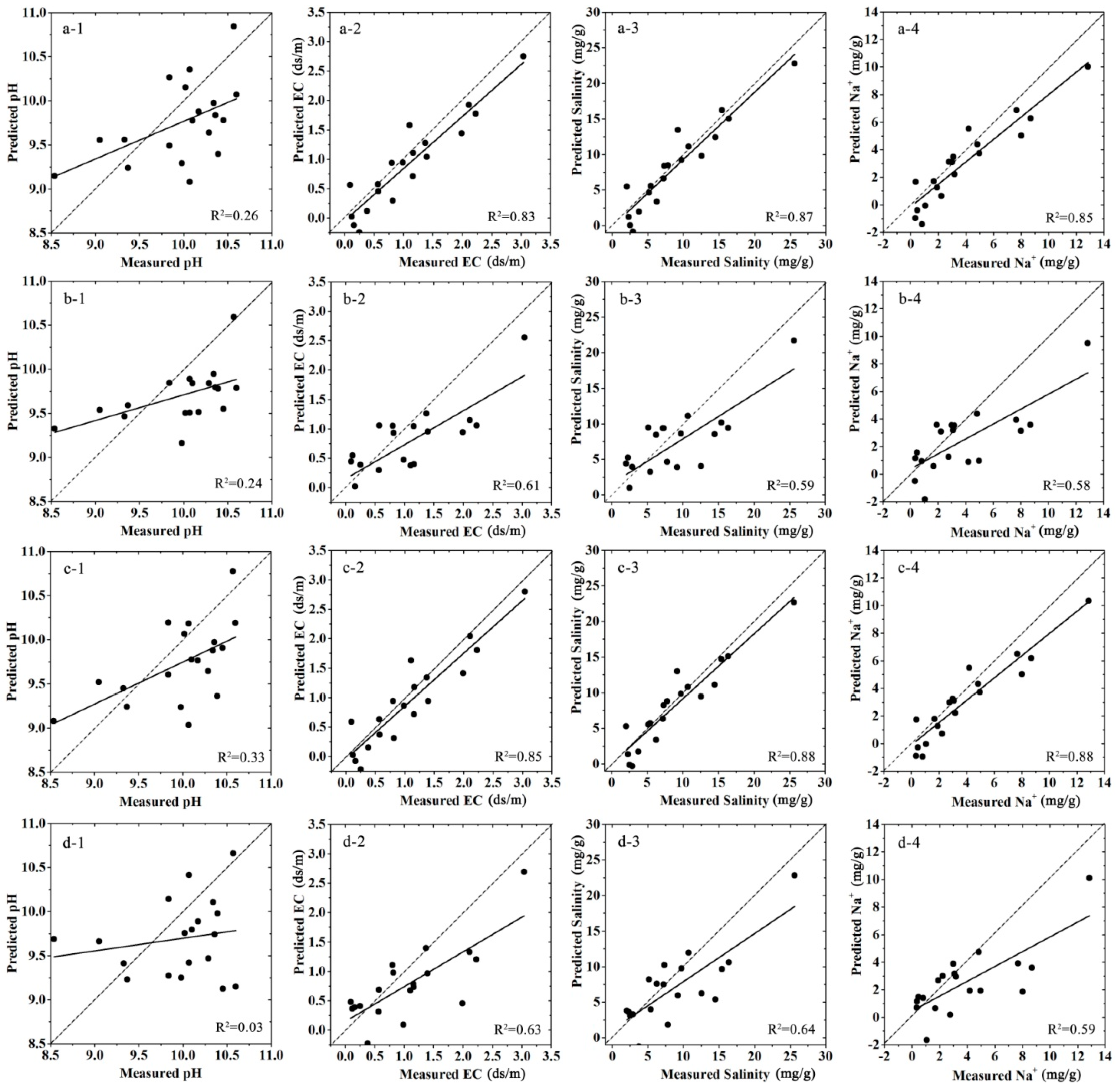