How Long should the MISR Record Be when Evaluating Aerosol Optical Depth Climatology in Climate Models?
Next Article in Special Issue

The Vegetation Health Index (VHI) is widely used for monitoring drought using satellite data. VHI depends on vegetation state and thermal stress, respectively assessed via (i) the Vegetation Condition Index (VCI) that usually relies on information from the visible and near infra-red parts of the spectrum (in the form of Normalized Difference Vegetation Index, NDVI); and (ii) the Thermal Condition Index (TCI), based on top of atmosphere thermal infrared (TIR) brightness temperature or on TIR-derived Land Surface Temperature (LST). VHI is then estimated as a weighted average of VCI and TCI. However, the optimum weights of the two components are usually not known and VHI is usually estimated attributing a weight of 0.5 to both. Using a previously developed methodology for the Euro-Mediterranean region, we show that the multi-scalar drought index (SPEI) may be used to obtain optimal weights for VCI and TCI over the area covered by Meteosat satellites that includes Africa, Europe, and part of South America. The procedure is applied using clear-sky Meteosat Climate Data Records (CDRs) and all-sky LST derived by combining satellite and reanalysis data. Results obtained present a coherent spatial distribution of VCI and TCI weights when estimated using clear- and all-sky LST. This study paves the way for the development of a future VHI near-real time operational product for drought monitoring based on information from Meteosat satellites. View Full-Text
Keywords: drought monitoring; land surface temperature; vegetation health index; Meteosat; climate data records; standardized precipitation-evapotranspiration index drought monitoring; land surface temperature; vegetation health index; Meteosat; climate data records; standardized precipitation-evapotranspiration index
►▼ Show Figures 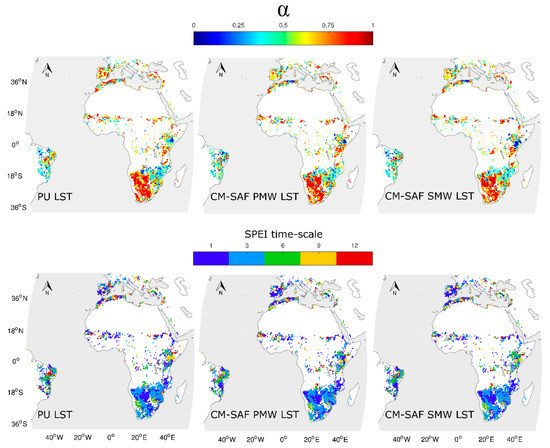