Scratching Beneath the Surface: A Model to Predict the Vertical Distribution of Prochlorococcus Using Remote Sensing

The unicellular cyanobacterium Prochlorococcus is the most dominant resident of the subtropical gyres, which are considered to be the largest biomes on earth. In this study, the spatial and temporal variability in the global distribution of Prochlorococcus was estimated in the Atlantic Ocean using an empirical model based on data from 13 Atlantic Meridional Transect cruises. Our model uses satellite-derived sea surface temperature (SST), remote-sensing reflectance at 443 and 488 nm, and the water temperature at a depth of 200 m from Argo data. The model divides the population of Prochlorococcus into two groups: ProI, which dominates under high-light conditions associated with the surface, and ProII, which favors low light found near the deep chlorophyll maximum. ProI and ProII are then summed to provide vertical profiles of the concentration of Prochlorococcus cells. This model predicts that Prochlorococcus cells contribute 32 Mt of carbon biomass (7.4 × 1026 cells) to the Atlantic Ocean, concentrated mainly within the subtropical gyres (35%) and areas near the Equatorial Convergence Zone (30%). When projected globally, 3.4 × 1027 Prochlorococcus cells represent 171 Mt of carbon biomass, with 43% of this global biomass allocated to the upper ocean (0–45 m depth). Annual cell standing stocks were relatively stable between the years 2003 and 2014, and the contribution of the gyres varies seasonally as gyres expand and contract, tracking changes in light and temperature, with lowest cell abundances during the boreal and austral winter (1.4 × 1013 cells m−2), when surface cell concentrations were highest (9.8 × 104 cells mL−1), whereas the opposite scenario was observed in spring–summer (2 × 1013 cells m−2). This model provides a three-dimensional view of the abundance of Prochlorococcus cells, revealing that Prochlorococcus contributes significantly to total phytoplankton biomass in the Atlantic Ocean, and can be applied using either in situ measurements at the sea surface (r2 = 0.83) or remote-sensing observables (r2 = 0.58). View Full-Text
Keywords: Prochlorococcus; light dependency; deep biomass maximum; subtropical gyres; seasonality Prochlorococcus; light dependency; deep biomass maximum; subtropical gyres; seasonality
►▼ Show Figures 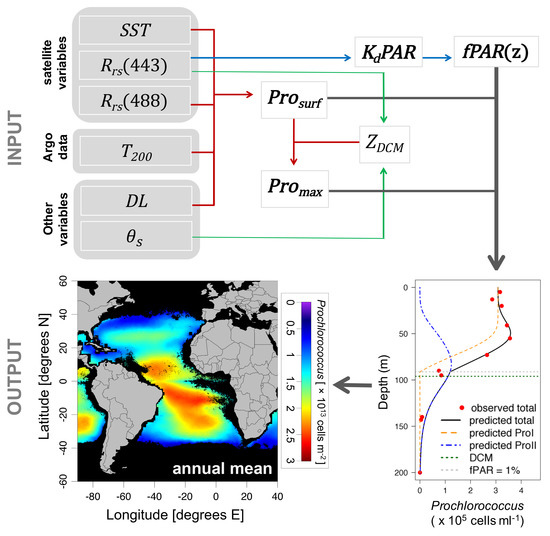