The Nyingchi Mw 6.4 earthquake on 17 November 2017 is the first large event since 1950 at the southeast end of the Jiali fault. This event was captured by interferometric synthetic aperture radar (InSAR) measurements from the European Space Agency (ESA) Sentinel-1A radar satellite, which provide the potential to determine the fault plane, as well as the co-seismic slip distribution, and understand future seismic hazards. However, due to the limited magnitude of surface displacements and the strong topography variations, InSAR-derived co-seismic signals are contaminated by strong tropospheric effects which makes it difficult (if not impossible) to determine the source parameters and co-seismic slip distribution. In this paper, we employ the Generic Atmospheric Correction Online Service for InSAR (GACOS) to generate correction maps for the co-seismic interferograms, and successfully extract co-seismic surface displacements for this large event. The phase standard deviation after correction for a seriously-contaminated interferogram reaches 0.8 cm, significantly improved from the traditional phase correlation analysis (1.13 cm) or bilinear interpolation (1.28 cm) methods. Our best model suggests that the seismogenic fault is a NW–SE striking back-thrust fault with a right-lateral strike slip component. This reflects the strain partitioning of NE shortening and eastward movement of the Eastern Tibetan plateau due to the oblique convergence between the Indian and Eurasian plates. View Full-Text
Keywords: earthquake; InSAR; tropospheric correction; source parameters; slip distribution earthquake; InSAR; tropospheric correction; source parameters; slip distribution
►▼ Show Figures 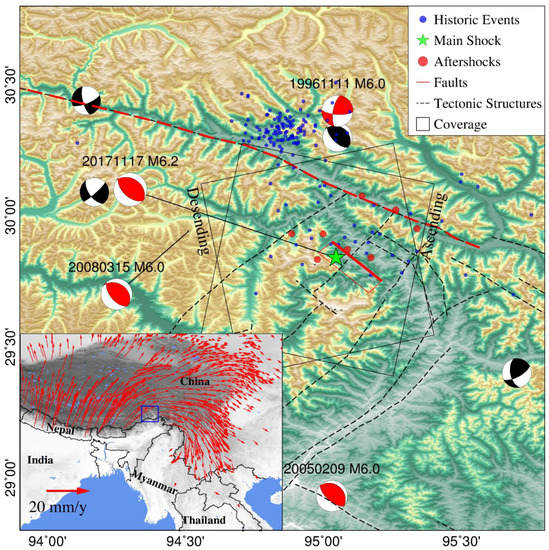