Groundwater Depletion in the West Liaohe River Basin, China and Its Implications Revealed by GRACE and In Situ Measurements

Groundwater Storage Changes in China from Satellite Gravity: An Overview

Groundwater plays a critical role in the global water cycle and is the drinking source for almost half of the world’s population. However, exact quantification of its storage change remains elusive due primarily to limited ground observations in space and time. The Gravity Recovery and Climate Experiment (GRACE) twin-satellite data have provided global observations of water storage variations at monthly sampling for over a decade and a half, and is enable to estimate changes in groundwater storage (GWS) after removing other water storage components using auxiliary datasets and models. In this paper, we present an overview of GWS changes in three main aquifers within China using GRACE data, and conduct a comprehensive accuracy assessment using in situ ground well observations and hydrological models. GRACE detects a significant GWS depletion rate of 7.2 ± 1.1 km3/yr in the North China Plain (NCP) during 2002–2014, consistent with ground well observations and model predictions. The Liaohe River Basin (LRB) experienced a pronounced GWS decline during 2005–2009, at a depletion rate of 5.0 ± 1.2 km3/yr. Since 2010, GRACE-based GWS reveal a slow recovery in the LRB, with excellent agreement with ground well observations. For the whole study period 2002–2014, no significant long-term GWS depletion is found in the LRB nor in the Tarim Basin. A case study in the Inner Tibetan Plateau highlights there still exist large uncertainties in GRACE-based GWS change estimates. View Full-Text
Keywords: GRACE; groundwater storage; satellite gravimetry; China; hydrological model; groundwater level; North China Plain GRACE; groundwater storage; satellite gravimetry; China; hydrological model; groundwater level; North China Plain
►▼ Show Figures 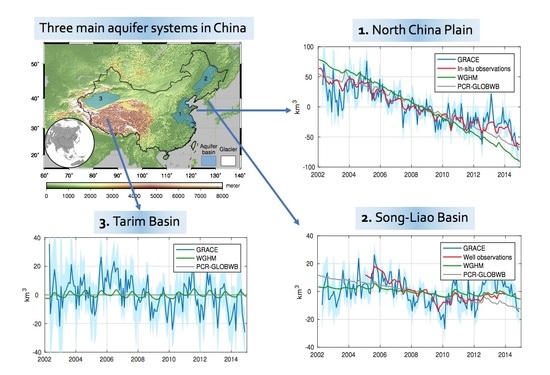