Does the Agglomeration of Producer Services and the Market Entry of Enterprises Promote Carbon Reduction? An Empirical Analysis of the Yangtze River Economic Belt
Next Article in Special Issue

Insulating Building Components Made from a Mixture of Waste and Vegetal Materials: Thermal Characterization of Nine New Products
Previous Article in Special Issue

The main objective of this paper is to explore the institutional convergence of Central and Eastern European Union member countries as a possible consequence of both the transfer of selected Western formal institutions to those countries and the adoption of acquis communautaire. This issue dates back to the beginning of the 1990s when the predominant expectation was that the successful formal institutions in Western countries would yield the same results in transition countries. In the meantime, mainly because of informal constraints, this has shown to be a misconception in most cases. The methodology used in the paper is twofold. First, by means of descriptive statistics, and using the varieties of capitalism approach, we show that, when analysing institutional quality using the Worldwide Governance Indicators (WGI), there are two divergent groups of EU countries. The first group consists of Liberal, Nordic, and Continental countries, and the second consists of Mediterranean and CEE member states that are further divided into liberal and coordinated market economies. Second, based on the calculation of the σ- and unconditional β-convergence of governance trends in the period 1996–2019, we empirically confirm that there are also variations within the CEE countries as well as within the specific dimensions of governance. View Full-Text
Keywords: convergence; divergence; institutions; post-socialism; transition convergence; divergence; institutions; post-socialism; transition
►▼ Show Figures 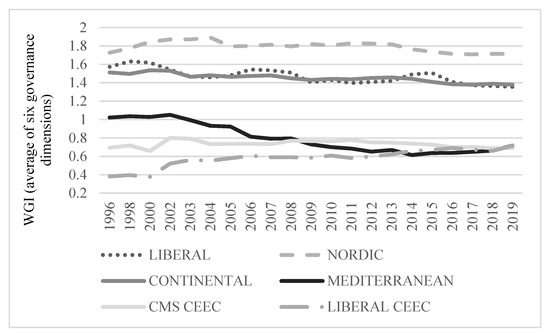