The assessment of the relationships between farm management systems and nature conservation may help in the design of more efficient strategies to uphold economic benefits and biodiversity conservation. To our knowledge, this is the first work in Brazil to study the relationship between farm conservation status and technification level. Here, we test the hypothesis that dairy farms with higher levels of technification have a higher percentage of natural vegetation and connectivity, and that differences in environment features between farms explain their conservation status. We obtained variables related to the level of technification such as feed, milking, sanitary control and breeding management systems. We show that farmers with a higher level of technification, such as artificial insemination in cattle breeding, tended to conserve a higher percentage of natural vegetation, as well as larger farms with a higher percentage of riparian forest. The adoption of artificial insemination is associated with other technification systems such as a forage diet, milking method and frequency and sanitary control. It is also significantly related to higher milk productivity. Our novel results point to a positive effect of technification on the conservation of natural vegetation, suggesting that economic incentives and programs aimed at increasing technification in cattle breeding may increase dairy production and conservation within the study area. Our findings also show an effect of larger areas of riparian forests, which are protected by Brazilian policy, in the conservation status of dairy farms.
Keywords: agricultural landscapes; Conefor; connectivity; legal reserve; long-term ecological research; spatial-temporal heterogeneity agricultural landscapes; Conefor; connectivity; legal reserve; long-term ecological research; spatial-temporal heterogeneity

We obtained the slope map from the TOPODATA INPE (National Institute for Space Research, http://www.dsr.inpe.br/topodata/acesso.php) database with 30 × 30 m spatial resolution. For each farm, we used the mean slope of all pixels. Using farm boundaries (Supplementary File S2, Figure S1), we identified areas of natural vegetation in each farm and calculated the farm area, the percentage of riparian forest, and percentage of agriculture and pasture. The available soil maps for the studied area were performed in small scale with few details (1:250,000) and show that the region is comprised mostly by dystrophic red oxisol with low variation among farms; thus, soil type could not be used as explanatory variable.

2.4. Conservation Status of the Dairy Farms

We used percentage of natural vegetation and connectivity as proxies of the conservation status of each farm (response variables). To verify the conservation status of natural vegetation that exceeds riparian forests in farms, we calculated the legal reserve area, which are areas of natural vegetation that should be preserved following Brazilian environmental law, corresponding to 20% of the total farm area in the Cerrado biome. To calculate legal reserve area, which is independent of APPs (Areas of Permanent Protection) such as riparian forests, we obtained the total percentage of natural vegetation and extracted the percentage of riparian forest. The highest slope in the 25 farms analyzed was ~13%, lower than the slope considered as APP by Brazilian environmental law (>45° in hillsides or 25° in hilltops). Thus, all APPs in our study area are riparian forests.
Connectivity is a measure of the landscape permeability to species movement among habitat patches [46,47]. To measure connectivity among remnant patches of natural vegetation in farms we used the Integral Index of Connectivity (IIC, [48]) implemented in Conefor [49] available in R version 3.6.1. [50]. The IIC, implemented in Conefor software [49], is based on the concept of graph theory and habitat availability, integrating habitat amount and the connectivity among patches of habitat [48]. IIC ranges from 0 (no connectivity among patches within the landscape) to 1 (high connectivity between remnant patches).
We calculated IIC considering each farm as a different landscape and habitat as all categories of natural vegetation. We used the mean value of IIC among four spatial distances as the response variable (100, 300, 500 and 1000 m), because most farms in the studied area were small and IIC values for all distances evaluated were very similar (Table S1).

To analyze the effect of technification and environment features in conservation of dairy farms we first verified the multicollinearity among explanatory variables. For technification variables we used the generalized variance-inflation factor (Gvif), and for environment features we used the variance-inflation factor (Vif), excluding in this step the farm size which is a categorical variable. We used the car package [51] implemented in R version 3.6.1. For technification, we ran one model per variable group (Table 1). We used a stepwise approach eliminating the models with Gvif or Vif > 5.0 [52]. Gvif is equivalent to Vif for categorical variables, the inflation in size of the confidence ellipse or ellipsoid for the coefficients of the predictor variable in comparison with what would be obtained for orthogonal, uncorrelated data [53].
We then analyzed the effects of technification and environment features on farm conservation status using linear models. We defined all categorical variables as “factors,” except daily milk production and environment variables, which correspond to continuous variables. To select the best variable explaining percentage of natural vegetation or IIC, we used the function drop1 in R version 3.6.1. [50] with stepwise backward selection and Chi-Square distribution to calculate the significance of each variable per group, considering technification and environment variables separately. We considered as significant all variables with p ≤ 0.05, and marginally significant variables with p ≤ 0.10.
We tested the significance of association between pairs of technification variables using Kendall’s coefficient of concordance (Kendall’s tau-b) to test for concordance or attribute agreement between variables. Analyses were performed using the software Minitab®18.

Although farmers declared legal reserve area equal to the minimum required by Brazilian environmental law in Central-Brazil (20% of the farm area, Table S1), 84% of the farms had lower percentage of natural vegetation than the minimum required for legal reserve (Figure 2a, Supplementary Table S1). The total area of natural vegetation (Figure S2, Table S1) comprised 5.42 to 46.55% of the farm area (mean = 24.84%, SD = 11.45%), and only 16% of the dairy farms had proportion of natural vegetation > 20%, excluding riparian forests (Figure 2a).
Most dairy farms (80%) were family or small size, and only one was a large dairy farm (Figure 2b, Table S1, Figure S2). Mean IIC ranged from 0.0023 to 0.2141 (Figure S3, Table S1), and the mean overall farms was very low, 0.0646 (SD = 0.0561), meaning that the connectivity among remaining patches of natural vegetation within farms was very low (Figure 2c).
Most dairy farms use free grazing (pasture-raised dairy) and semi-confinement as primary forage diet system (Table S2). They use fertilizers in pasture management and perform pasture restoration, and provide supplementary feed during the dry season (Table S2). Most farmers use productivity as the criterium to give supplement to the cattle. Machine with bucket is the most used milking method, and milking twice-a-day is more frequently used (Table S2). Most farmers milk in a milking pit or in a milking parlor with roof and cement floor, use farm milk cooling tank and can receive milk quality-based payment (Table S2). Most farmers use commercial sanitizer to cleaning udder before milking and do not perform CMT test or perform monthly (Table S2). Most farmers use selective breeding method with natural service with selected breeding bulls and pregnancy diagnosis with transrectal palpation (Table S2). Farmers have Holland or crossbreed dairy cattle and do not separate pregnant cows.

This is the first study in Brazil showing that dairy farms using cutting edge technology in cattle breeding, such as artificial insemination, significantly conserve higher proportion of natural vegetation in their farms. Therefore, technification affected positively the conservation of natural vegetation in the COFA-LTER landscape. Farmers adopting artificial insemination had higher daily milk production and tended to use other technification systems related to dairy farm management more frequently than the other farmers, such as confinement and semi-confinement, and milking with automatic machine.
Brazil harbors a diversity of social, environmental, and economic conditions with can provide different perspectives to other parts of the territory and other productive systems (see an example in [32]). Our dataset provides evidence that incentives to technification may promote economic benefits to dairy farmers and can provide opportunities to preserve or restore habitats in COFA-LTER landscape. Our dataset can be a starting point to design successful strategies aimed at the conservation and dairy production in the study area. However, the use of new practices or strategies can be seen as a barrier if enable conditions are not offered safely, like technical assistance and training for labor [32,67].
The significant relationships between farm size and percentage of riparian forest and farm conservation status highlight the importance of riparian forests to maintain the connectivity at farm level, and to favor conservation status in productive dairy regions. Ecological initiatives should be designed at local and regional levels to favor essential components such as connectivity and designing farms and landscapes more permeable to organism’s movement. Additional incentives of local government are essential to support the dairy farmers to achieve economic benefits, sustainable intensification, maintain or restore habitats, and ensuring ecological benefits within farms. These initiatives are necessary independently of farm size, to promote a conservation status at landscape level. We acknowledge the limitations of our results due to the sampling size, i.e., the number of dairy farms analyzed, and the dairy farm sizes. Most farms in the COFA-LTER region are family, small or medium size, thus our results may be used with caution to large size and very large states. Also, the specific environmental conditions of the region may also influence the results, since riparian forests are important landscape components in the region due to the topography and geomorphology. Also, more studies are necessary at the farm level to understand the relationship between technification and conservation, identify barriers, and promote efficient strategies to fix it.

The present work involved face to face interviews with farmers. All farmers signed an informed consent for before being interviewed, as stated by Brazilian law.

R.G.C. has continuously been supported by productivity grants from CNPq and Capes, which we gratefully acknowledge. We thank two anonymous reviewers for helpful comments to improve the manuscript.

The authors declare that the research was conducted in the absence of any commercial, financial or non-financial relationships that could be construed as a potential conflict of interest. 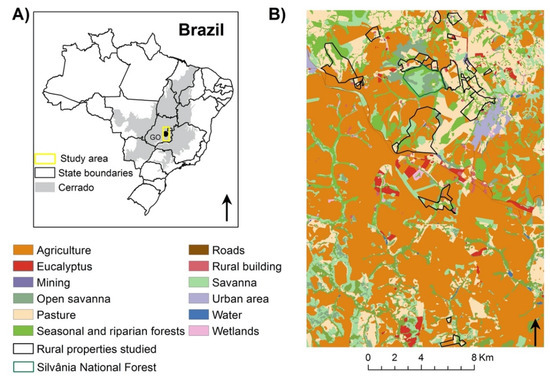 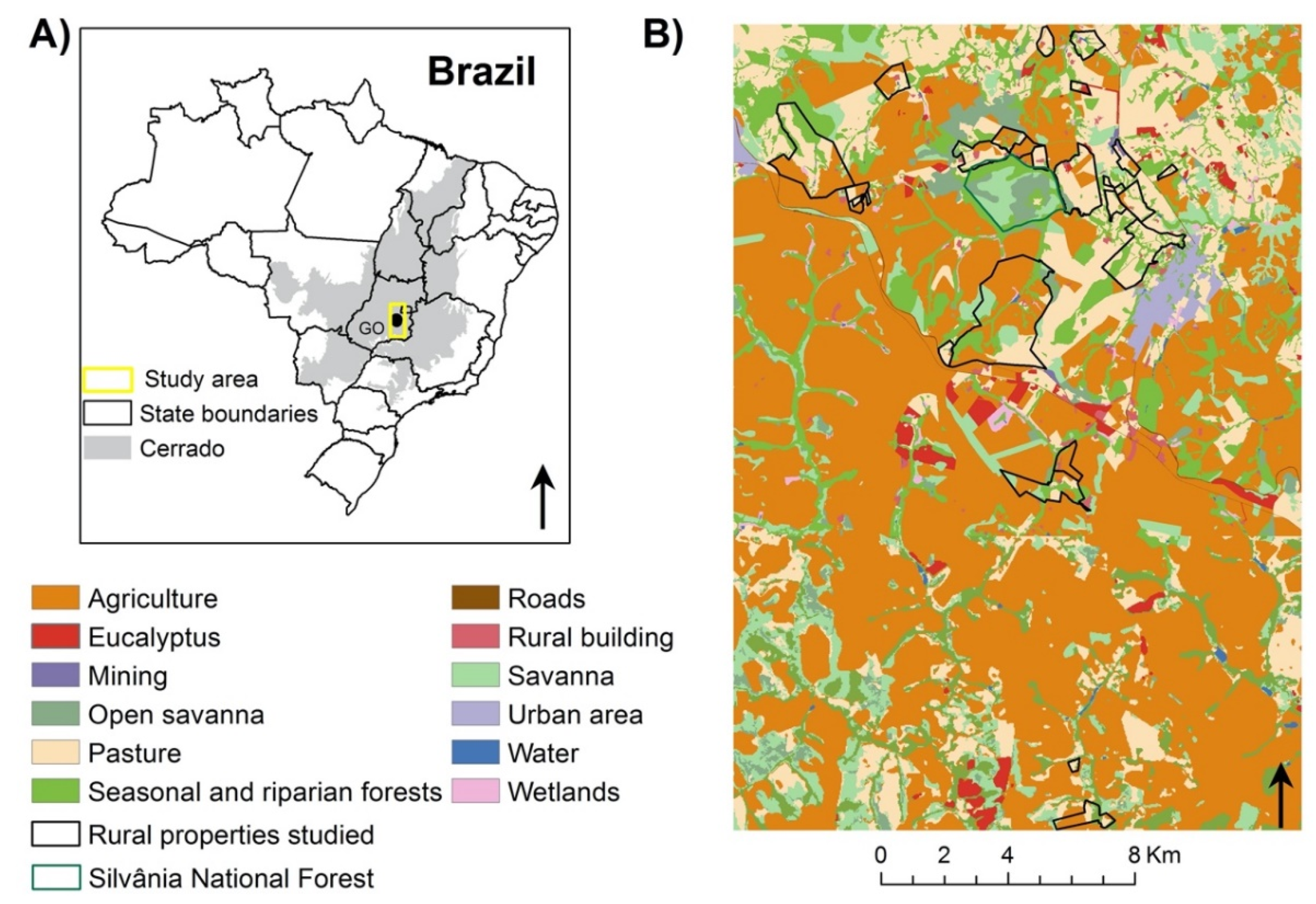 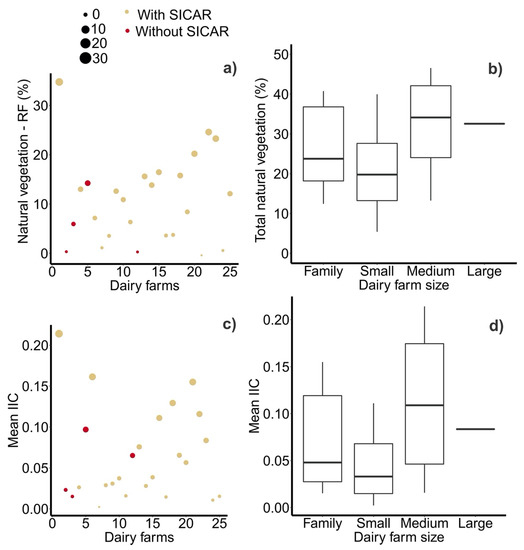 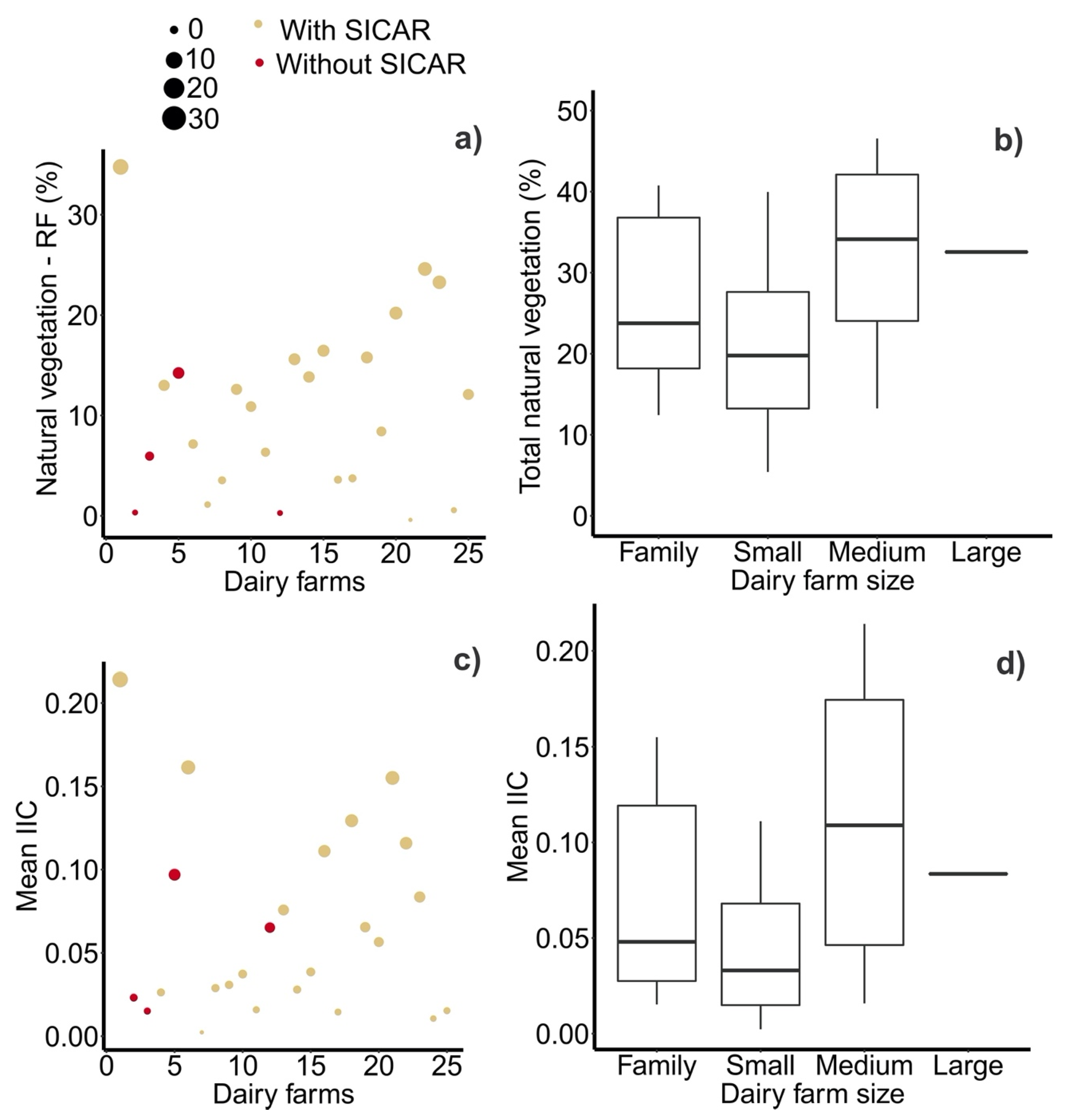 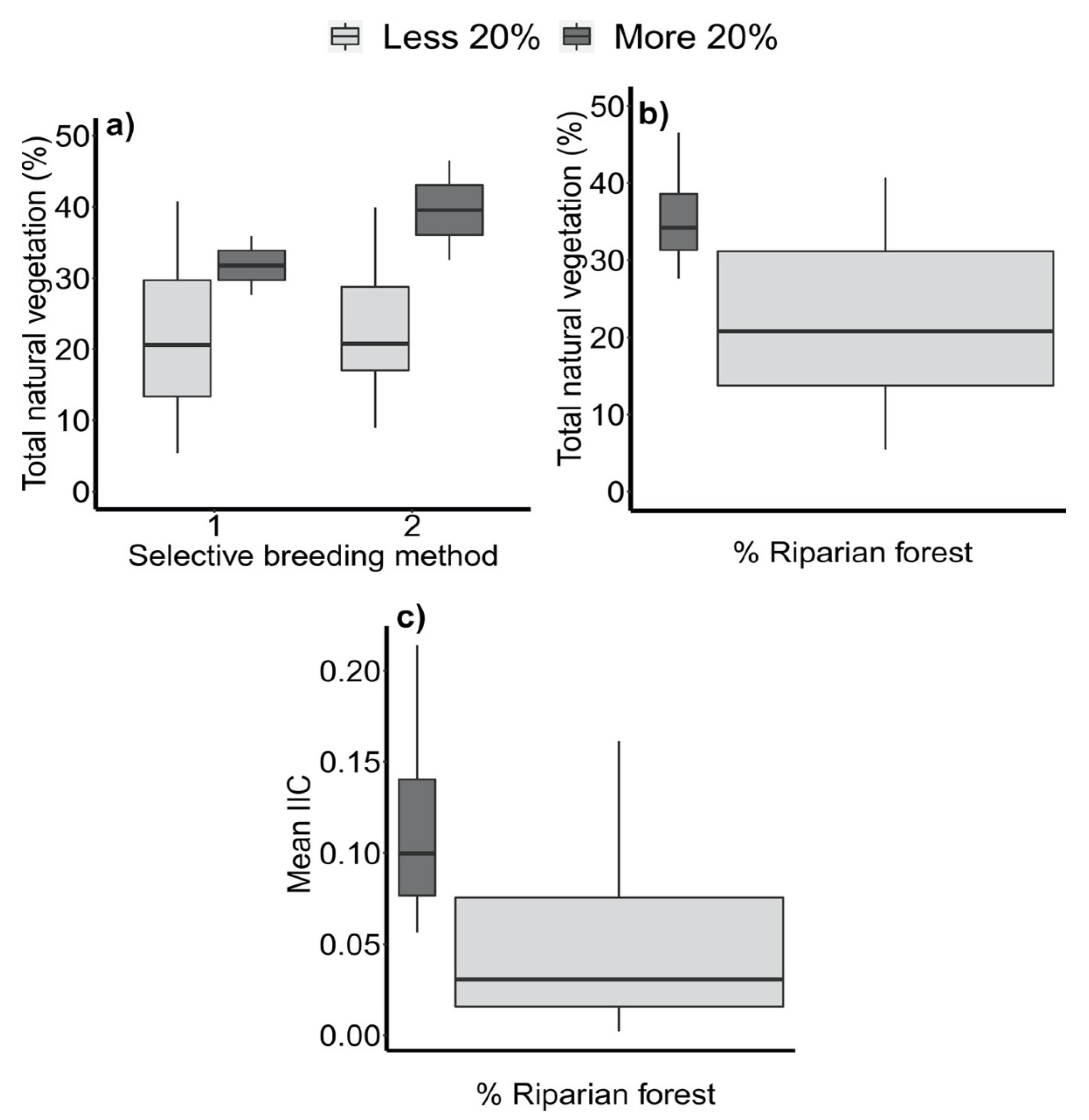 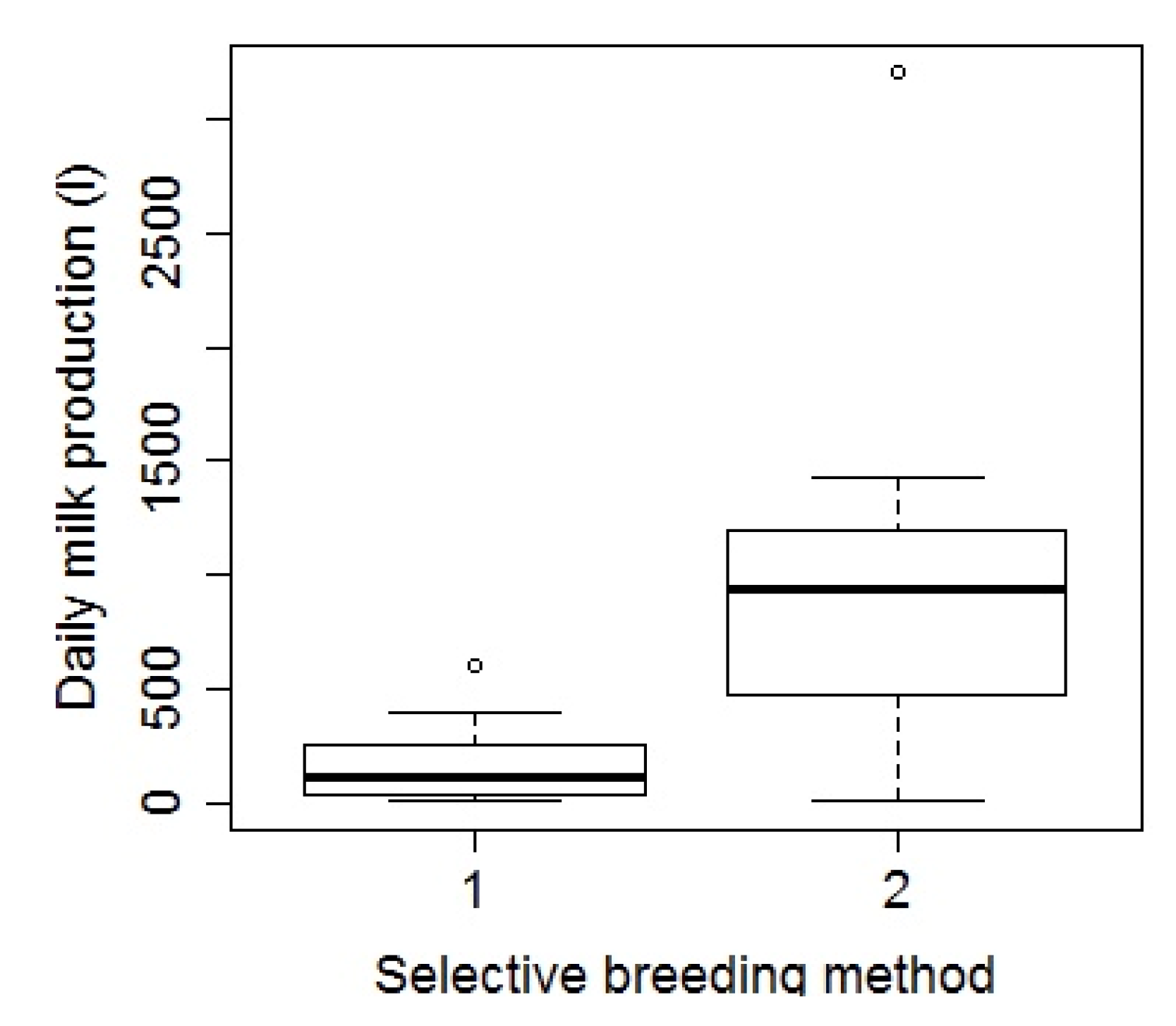