Sustainability of Mussel (Mytilus Galloprovincialis) Farming in the Po River Delta, Northern Italy, Based on a Life Cycle Assessment Approach
Next Article in Special Issue

High-Growth Aspirations of Entrepreneurs in Latin America: Do Alliances Matter?

The integration of young people in the labor market has become a severe societal problem in many European countries, particularly for its long-term impact on life chances. Moreover, the overall rise in youth unemployment represents a challenge to the European Union (EU), which has launched several youth-specific policy initiatives in the last decade. The integration of young people into the labor market represents a core mission of European policy and of the European Social Fund (ESF). Recent policy initiatives, such as the Juncker Plan, the Youth Guarantee, the European Alliance for Apprenticeship, or the Smart Specialization, mirror both the growing concern and the efforts to improve skills, participation, and mobility among youths, as well as firms’ investments and training capacities.
Countries’ institutional configurations and structural characteristics matter considerably in mediating the impact of the economic cycle on youths, generating specific outcomes in terms of labor market integration [1]. However, recent empirical evidence shows significant regional and territorial differences in youth unemployment patterns [2,3], school-to-work transition outcomes, and young adults’ living conditions [4,5]. Due to the ongoing trends of rescaling in territorial governance [6] and to the persistence of spatial disparities [7,8], the internal homogeneity of transition systems at the country level cannot be taken for granted [9]. As a consequence, on the policy side, Europe-wide place-neutral or general-purpose interventions may be ineffective in addressing problems of spatially uneven youth labor market opportunities.
This article analyzes youth integration by producing a composite measure that allows for investigating territorial and long-term variations in the patterns of young people’s participation in the labor market across all European regions. To do this, we compute an indicator for measuring regional youth labor market integration (YLMI) in the EU. The YLMI index combines several indicators of the outcomes of school-to-work transitions, focusing on exclusion (i.e., NEET rates (Not in Employment, Education, or Training) and unemployment ratios), access (i.e., employment rates according to educational attainment), and duration of the transition into employment (i.e., employment rates three years after educational completion) for 281 NUTS-2 (Nomenclature of Territorial Units for Statistics) European regions during the period 2004–2018. As a result, it provides a measure of contextual regional fragilities or strengths of youth labor market integration. This is important, especially from the perspective of territorial governance. Indeed, the literature increasingly shows the relevance of both national and local contexts for the design and implementation of social policies [10,11].
In analytical terms, the added value of our contribution lies in the combination of a long-term, regional, EU-wide perspective, using a multistep methodology to provide a multidimensional measure of regional differences in youth labor market integration. The descriptive nature of this paper is theoretically driven, i.e., it wants to contribute to the literature on youth studies by providing evidence of the relevance of the territorial dimension in structuring the life chances and opportunity structures of young people [12]. In terms of policy implications, the YLMI index helps to identify benchmark regions and set policy priorities for interventions aimed at increasing cohesion and youth employment across European territories. The conditions of youths represent a key issue for European territorial cohesion and for the overall future of Europe as a sustainable polity. Therefore, the YLMI index represents a valuable tool for territorial governance, as it allows to comparatively address the issue of territorial disparities related to young people’s opportunities. Analysis of the indicators provides a comparative view of both the youth integration into the labor market at a regional level and the evolution of this integration over a time span of 14 years, which represents a critical period that encompasses the impact and the aftermath of the Great Recession.
Our results challenge the concept of Europe as a converging machine by showing the persisting paths of differentiation across regions, as well as evidence of untapped potential due to the lack of opportunities. Patterns of territorial disparities, driven by combinations of socioeconomic and geographical factors, have been spotted as reasons behind the rise in populism and anti-EU voting [12]. The rise of populism and anti-Europeanism has been described as a geography of discontent related to poor education and employment opportunities in places and regions lagging behind [13], mainly identified by middle-aged and older individuals [14,15,16]. Our analysis reveals persistent untapped regional potential expressed by the lack of youth labor market integration. In this light, the YLMI index provides valuable information for raising the awareness of policy-makers, showing the characteristics of the job market opportunities of young people, as a core group for the future of Europe. In lagging regions, the lack of employment opportunities and integration of youths trapped in “places that do not matter” could be fueling discontent, seriously undermining EU cohesion and sustainability as a polity [13].
In Section 2, we elaborate on youth labor market dynamics and on the need of place-sensitive evidence on the topic. In Section 3, we construct a composite measure of YLMI. In Section 4, we provide comparative and longitudinal evidence by analyzing the level and change of YLMI across European regions across a fourteen-year period (2005–2018). The final section, Section 5, summarizes the main results and disentangles their analytical consequences for further research.

4. Results and Discussion: Variation of YLMI in Europe

The three authors contributed equally to the present paper. Each phase of the paper development was discussed and worked on by all authors. All authors have read and agreed to the published version of the manuscript.

This research received no external funding, but it should be acknowledged that it builds upon ideas and data collected in the following Projects: (1) “Young AduLLLt – Policies Supporting Young People in their Life Course. A Comparative Perspective of Lifelong Learning and Inclusion in Education and Work in Europe” (2) “COHSMO. Inequality, Urbanization and Territorial Cohesion: Developing the European Social Model of Economic Growth and Democratic Capacity”. Both projects were funded by the European Union’s Horizon 2020 research and innovation Programme. Rosario Scandurra also acknowledges the support of the Juan de la Cierva Grants Programme (Ref. FJCI-2016-28588). The APC was funded by the University of Vienna.

The authors declare no conflicts of interest with respect to the research, authorship, and/or publication of this article. 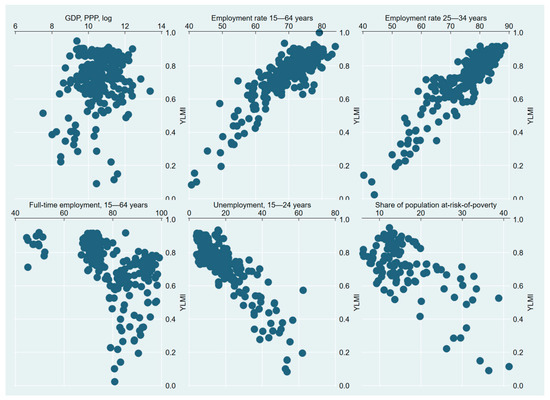