The Model of Diffusion of Knowledge on Industry 4.0 in Marshallian Clusters
Next Article in Special Issue

Sustainability of Mussel (Mytilus Galloprovincialis) Farming in the Po River Delta, Northern Italy, Based on a Life Cycle Assessment Approach

Molluscan shellfish aquaculture is considered a “green” industry because of the limited presence of chemicals and risk of pathogens during farming in licensed areas, which provide a safe, nutritive and healthy food source. Moreover, the environmental impact of their production is lower than all other fish animal per unit of protein. In particular, mussels’ production was the first organized mollusk aquaculture in Europe and is now one of the most extended. Italy is the second main European producer of mussels. Taking into account the relevance of the sector, Italian Mediterranean mussel (Mytilus galloprovincialis) aquaculture has been considered for a life cycle assessment (LCA), from a cradle-to-gate perspective. The mussel farms were located in the northern Adriatic Sea, close to the Po River Delta, a region traditionally vocated to bivalve aquaculture. Results have shown that the growing and harvesting phases are the most critical life cycle stages (“hotspots”) due to the production and use of boats, and the great quantity of non-recyclable high-density polyethylene (HDPE) socks used during the yearly productive cycle. Several improvement potentials have been identified and estimated by means of a sensitivity analysis. Furthermore, regarding the principal exporting countries to Italy (Spain and Chile), the transport factors in an overall sustainability assessment have been considered, in order to compare the local and global mussels supply chain. View Full-Text
Keywords: life cycle assessment; environmental impact; mussel farming; Mytilus galloprovincialis; Po River delta life cycle assessment; environmental impact; mussel farming; Mytilus galloprovincialis; Po River delta
►▼ Show Figures 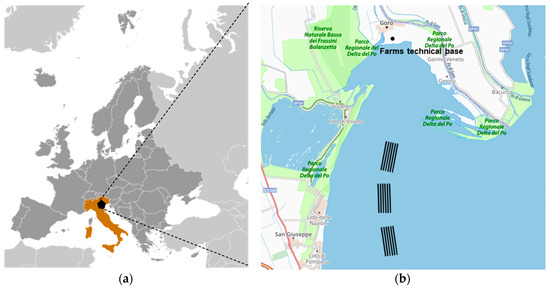