Sustainable Banking; Evaluation of the European Business Models
Next Article in Special Issue

Enhancing the Sustainable Goal of Access to Healthcare: Findings from a Literature Review on Telemedicine Employment in Rural Areas
Previous Article in Journal

The aim of this study was to determine the validity and reliability that a smartphone accelerometer (ACC) used by a mobile basic program (MBP) can provide to measure the mean velocity of a bench-press (BP) lift. Ten volunteers participated in the study (age 23.1 ± 2.5 years; mean ± SD). They had more than one year of resistance training experience in BP exercise. All performed three attempts with different loads: 70%, 90%, and 100% of the estimated value of the one-repetition maximum (1RM). In each repetition, the mean velocity was measured by a validated linear transducer and the ACC. The smartphone accelerometer used by the mobile basic program showed no significant differences between the mean velocities at 70% 1RM lifts (ACC = 0.52 ± 0.11 m/s; transducer = 0.54 ± 0.09 m/s, p > 0.05). However, significant differences were found in the mean velocities for 90% 1RM (ACC = 0.46 ± 0.09 m/s; transducer = 0.31 ± 0.03 m/s, p < 0.001), and 100% 1RM (ACC = 0.33 ± 0.21 m/s; transducer = 0.16 ± 0.04 m/s, p < 0.05). The accelerometer is sensitive enough to measure different lift velocities, but the algorithm must be correctly calibrated. View Full-Text
Keywords: accelerometer; smartphone; strength; training; technology accelerometer; smartphone; strength; training; technology
►▼ Show Figures 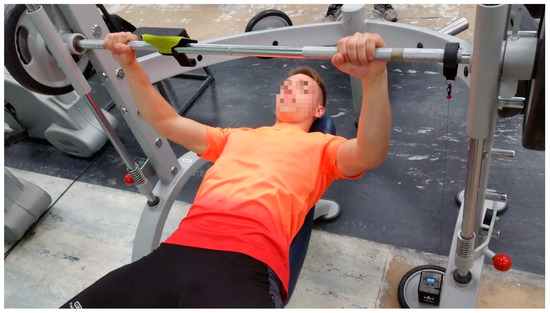