Osteoporosis is considered a major public health problem worldwide. In order to develop effective physical exercise protocols for the prevention of osteoporosis and ensure skeletal integrity, the intensity of the exercise must be quantified objectively and accurately. This study aimed to assess the validity of a wearable accelerometer-based activity monitor for use in osteoporosis prevention programs. Eighteen premenopausal women completed an exercise protocol consisting of five countermovement jumps followed by four treadmill bouts at different speeds. Participants carried two pairs of accelerometers (Muvone® and ActiGraph GT3X+) located on the wrist and hip. Three types of analysis were performed: (1) association between measurements from both devices; (2) level of similarity in group estimates; and (3) evaluation of measurement bias. High to almost perfect correlations between the peak acceleration measured by both devices were found in all protocol tests (r = 0.607–0.975, p < 0.001). Differences in group estimates were non-significant and measurement bias between devices was below 6%. In conclusion, the validity of Muvone® to quantify acceleration has been tested at both the wrist and hip and could be used to assess mechanical loading during physical activities for the implementation of population-wide osteoporosis prevention programs. View Full-Text
Keywords: osteoporosis; prevention; exercise; accelerometer; wearable osteoporosis; prevention; exercise; accelerometer; wearable
►▼ Show Figures 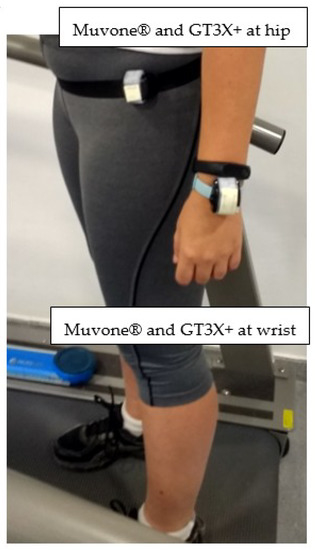