Rethinking the Box for Sustainable Logistics
Next Article in Special Issue

Intense industrial activities could result in massive accumulations of trace elements in the soil and risk the terrestrial ecosystems and human health. A total of 119 topsoil samples from a typical industrial area, Huinong District, Ningxia, Northwest China, were collected, and the contents of six trace elements (As, Cd, Cr, Cu, Pb, and Zn) were determined. The results indicated that the mean concentrations of Cr, Cu, Pb, and Zn were lower than the national standard values of class II, while As and Cd were 2.77 and 3.92 times the corresponding threshold values. Multivariate analyses revealed six metals can be categorized into three principal components (PC). PC1 was As, Cd, and Pb, which originated from anthropogenic inputs. PC2 consisted of Cr and Cu, which originated from the natural geological background. PC3 only included Zn and was mainly due to agricultural impacts. The spatial distribution of six metals greatly varied from local anthropic inputs. For As and Cd, the most heavily polluted area was located in the north and southwest parts of the study area, whereas most Zn was enriched in the southern part, which was mainly agricultural land. The topsoil in this area displayed a moderate environmental risk with the metal pollution order of Cd > As > Zn ≈ Cr ≈ Pb ≈ Cu. Moreover, the contents of trace elements in the industrial land and water were relatively higher than those in other land-use types, indicating a considerable risk of metal migration and accumulation to rivers and the groundwater. It is suggested that effective remediation measures for Cd and As, in particular, should be properly employed for the sustainable development of the soil and groundwater, while reducing the risk of elements to the local residents in Huinong District. View Full-Text
Keywords: trace element; soil pollution; industrial area; spatial distribution; potential ecological risk; multivariate analysis; source trace element; soil pollution; industrial area; spatial distribution; potential ecological risk; multivariate analysis; source
►▼ Show Figures 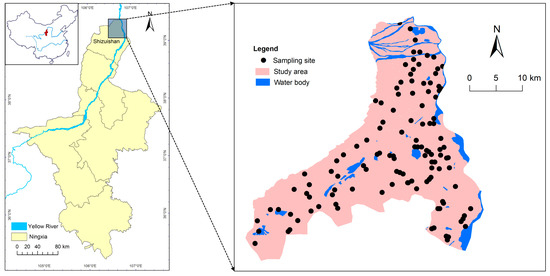