The Italian Case of Lecco Innovation Living Lab: Stakeholders’ Needs and Activities to Contribute to the Technological Innovation Process in Healthcare
Previous Article in Journal

The objective of this study was to use life cycle assessment to estimate the environmental impacts (from farm to factory gate) of the 198 hard-coded line-items included in the food frequency questionnaire of the Adventist Health Study-2 survey and to assess differences among food groups. Life cycle inventories were created using existing data sources and primary data, and their global warming potential (GWP), land use, and water consumption impacts were assessed using the ReCiPe 2016 methodology. In addition to presenting the impacts according to weight and protein content across food groups, we include the novel addition of presenting impacts according to the NOVA classification indicating various levels of processing. Food categories were compared based on one kilogram of edible food, protein food sources were compared based on one kilogram of protein, and NOVA comparisons were based on one serving. In general, meats had the highest environmental impacts per both weight and protein content, while the lowest overall impacts per kilogram came from fruits. Meat analogs had the lowest overall impacts per kilogram of protein, contrary to expectations that additional processing would result in higher environmental impacts when compared to whole plant-based foods. Per serving, ultra-processed foods had the highest GWP, processed foods the highest land use, and minimally processed foods the highest water consumption. Results from this analysis were consistent with other studies. Results from this study suggest that meat and ultra-processed foods have the overall worst environmental impacts, but high water consumption in some minimally processed foods means that those should be carefully considered as well. View Full-Text
Keywords: food systems; dietary environmental impact; greenhouse gas emission; land use; water consumption food systems; dietary environmental impact; greenhouse gas emission; land use; water consumption
►▼ Show Figures 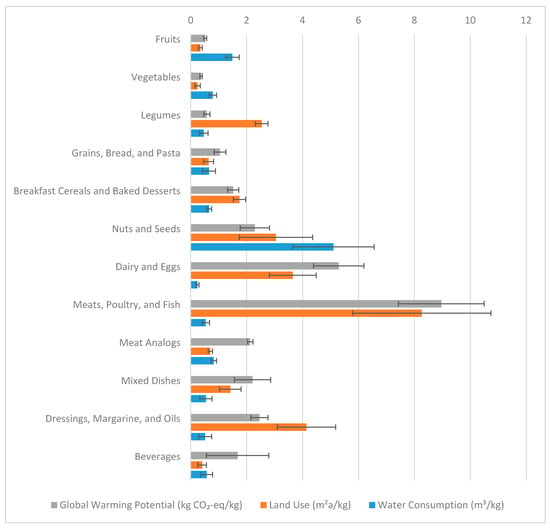