This paper proposes a finite control set model predictive control (FCS-MPC) with a reduced computational burden for a single-phase grid-connected modified packed U-cell multilevel inverter (MPUC-MLI) with two control objectives: reference current tracking and switching frequency minimization. The considered competitive topology consists of two units with six active switches and two DC sources in each unit, allowing the generation of 49 levels in the output voltage, which is considered a significant reduction in the active and passive components compared to the conventional and recently developed topologies of multilevel inverters (MLIs). This topology has 49 different switching states, which means that 49 predictions of the future current and 49 calculations of the cost function are required for each evaluation of the conventional FCS-MPC. Accordingly, the computational load is heavy. Thus, this paper presents two reduced-complexity FCS-MPC methods to reduce the calculation burden. The first technique reduces the computational load almost to half by computing the reference voltage and dividing the states of the MLI into two sets. Based on the reference voltage polarity, one set is defined and evaluated to specify the optimal state, which has a minimal cost function. However, in the second proposed method, only three states of the 49 states are evaluated each iteration, achieving a significant reduction in the execution time and superior control performance compared to the conventional FCS-MPC. A mathematical analysis is conducted based on the reference voltage value to locate the three vectors under evaluation. In the second part of the paper, the sensitivity to parameter variations for the proposed simplified FCS-MPC is investigated and tackled by employing an extended Kalman filter (EKF). In addition, noise related to variable measurement is filtered in the proposed system with the EKF. The simulation investigation was performed using MATLAB/Simulink to validate the system under different operating conditions. View Full-Text
Keywords: multilevel inverter; current control; grid connection; switching frequency; model predictive control; computational burden; extended Kalman filter multilevel inverter; current control; grid connection; switching frequency; model predictive control; computational burden; extended Kalman filter
►▼ Show Figures 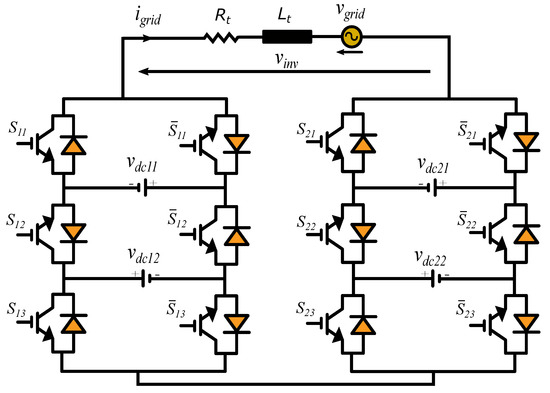