What Is the Recommended Dose of Physical Activity in the Treatment of Depression in Adults? A Protocol for a Systematic Review
Next Article in Special Issue

Reducing potential soil damage due to the passing of forest machinery is a key issue in sustainable forest management. Limiting soil compaction has a significant positive impact on forest soil. With this in mind, the aim of this work was the application of precision forestry tools, namely the Global Navigation Satellite System (GNSS) and Geographic Information System (GIS), to improve forwarding operations in hilly areas, thereby reducing the soil surface impacted. Three different forest study areas located on the slopes of Mount Amiata (Tuscany, Italy) were analyzed. Extraction operations were carried out using a John Deere 1410D forwarder. The study was conducted in chestnut (Castanea sativa Mill.) coppice, and two coniferous stands: black pine (Pinus nigra Arn.) and Monterey pine (Pinus radiata D. Don). The first stage of this work consisted of field surveys collecting data concerning new strip roads prepared by the forwarder operator to extract all the wood material from the forest areas. These new strip roads were detected using a GNSS system: specifically, a Trimble Juno Sb handheld data collector. The accumulated field data were recorded in GIS Software Quantum GIS 2.18, allowing the creation of strip road shapefiles followed by a calculation of the soil surface impacted during the extraction operation. In the second phase, various GIS tools were used to define a preliminary strip road network, developed to minimize impact on the surface, and, therefore, environmental disturbance. The results obtained showed the efficiency of precision forestry tools to improve forwarding operations. This electronic component, integrated with the on-board GNSS and GIS systems of the forwarder, could assure that the machine only followed the previously-planned strip roads, leading to a considerable reduction of the soil compaction and topsoil disturbances. The use of such tool can also minimize the risks of accidents in hilly areas operations, thus allowing more sustainable forest operations under all the three pillars of sustainability (economy, environment and society). View Full-Text
Keywords: GIS; GNSS; forwarder; precision forestry; sustainable forest operations GIS; GNSS; forwarder; precision forestry; sustainable forest operations
►▼ Show Figures 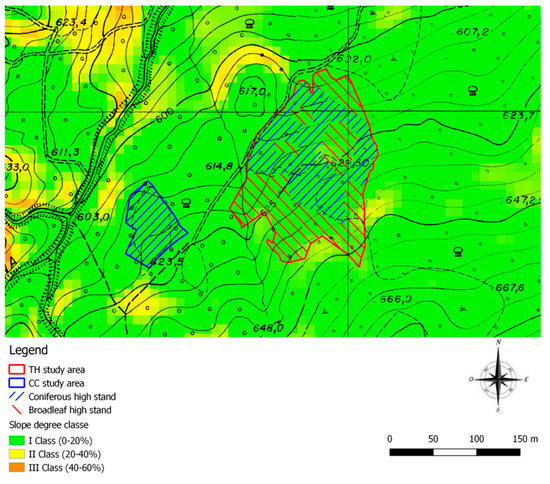